TORONTO, Jan. 18, 2017 /CNW/ - RNC Minerals (TSX: RNX) ("RNC") is pleased to announce the discovery at its Beta Hunt Mine in Western Australia of a significant extension of the A Zone gold structure and a re-design of the mining approach for the Western Flanks to larger and more productive bulk mining based on new data showing greater continuity of grade between previously interpreted vein structures.

Drilling highlights from the extension of the A Zone include:

"We will achieve a key milestone this month with the first large Western Flanks stope beginning production this month enabling us to achieve the previously announced 60,000 ounce annualized run rate gold production during Q1 and production of 65-70,000 ounces of gold at Beta Hunt in 2017. The development of this first much larger 20 m wide stope is also leading to a re-interpretation of Western Flanks mineralization as being more continuous and amenable to much larger bulk stopes, rather than those previously planned on the multiple narrower 3-10 metre wide veins. This re-interpretation has the potential to increase the Western Flanks resource and decrease development and production costs. Beta Hunt's tremendous resource potential is further underscored by the high grade A Zone drilling results that extend its strike length by more than 40%. More importantly, this southern-most extension of the A Zone has the potential to become another important production area in the near-term as it lies within 35 metres of existing infrastructure and is above the current development level of the Western Flanks decline." said Mark Selby, President and CEO of RNC.

Beta Hunt Production Update
Production from the first large, higher grade (3+ g/t) Western Flanks stope will commence this month and is expected to put the mine on track to achieve previously announced guidance of annualized production rates of 60,000 ounces of gold in the first quarter of 2017. This first large high grade stope, combined with a large A Zone stope, and several smaller high grade mining areas coming online by March 2017, is expected to deliver full year 2017 gold production of 65-70,000 ounces at an all-in-sustaining-cost of $US900-1,000 per ounce. During 2017, it is expected that costs will initially be higher and then decrease as production levels rise. Costs will also be affected by the level of nickel production which, given recent market volatility, is under consideration.

Preliminary results of the recently completed latest toll at the FMR Mill indicated that run-of-mine material (excluding lower grade development ore) graded 2.65 g/t to the end of December, in line with guidance for grades between 2.45-2.65 g/t during the fourth quarter. Recoveries are estimated at 94%, slightly higher than our 93% target. Final production figures will be incorporated into RNC's year-end reporting after final tolling results for gold and nickel have been completed.

The presence of shear-hosted gold mineralisation directly below nickel mineralisation is characteristic of the Beta Hunt Mine. In areas of historic nickel mining, this association can be used as a guide to test for gold mineralisation below. The mineral potential of this area was first highlighted by WMC in the 1980s. While mining the nickel from the Hunt deposit (Figure 2), anomalous visible gold was occasionally noted below the ultramafic contact. Historic drill holes in the area contained anomalous gold. Significant assays from the six recent drill holes are provided in Table 1. 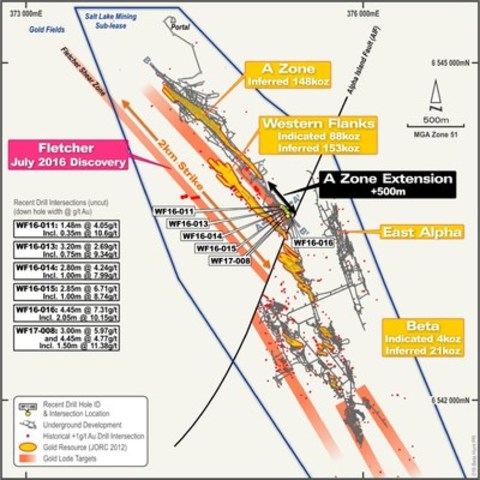 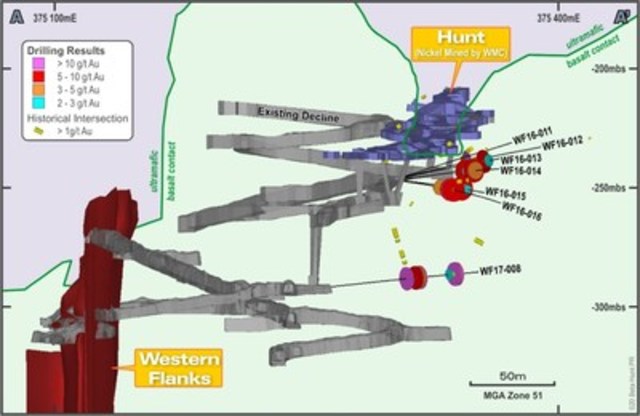 Table 1: Significant assay results from the A Zone Extension

A live webcast of the call will be available through CNW Group's website at: www.newswire.ca/en/webcast/index.cgi

About RNC
RNC is a multi-asset mineral resource company focused primarily on the acquisition, exploration, evaluation and development of base metal and precious metal properties. RNC's principal assets are the producing Beta Hunt gold and nickel mine in Western Australia, the Dumont Nickel Project located in the established Abitibi mining camp in Quebec and a 30% stake in the producing Reed Mine in the Flin Flon-Snow Lake region of Manitoba, Canada. RNC also owns a majority interest in the West Raglan and Qiqavik projects in Northern Quebec. RNC has a strong management team and Board with over 100 years of mining experience at Inco and Falconbridge. RNC's common shares trade on the TSX under the symbol RNX. RNC shares also trade on the OTCQX market under the symbol RNKLF.

Cautionary Statement Concerning Forward-Looking Statements
This news release contains "forward-looking information" including without limitation statements relating to the liquidity and capital resources of RNC, production guidance and the potential of the Beta Hunt and Reed mines.