TORONTO, April 10, 2017 /CNW/ - RNC Minerals (TSX: RNX) ("RNC") is pleased to announce positive infill drilling results following the discovery of a significant extension of the A Zone gold structure at its Beta Hunt Mine in Western Australia. 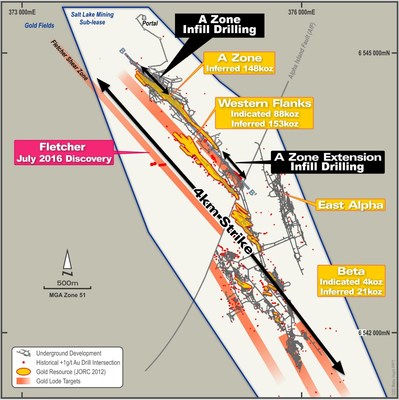 "Following the discovery of the high grade A Zone extension, which increased the known strike length by 500 metres to 1.7 kilometres, infill drilling results have increased our confidence that the southern-most extension of the A Zone has the potential to become an important production area in the near-term as it lies within 35 metres of existing infrastructure and is above the current development level of the Western Flanks decline. I am also pleased with infill drill results at the lower boundary of the A Zone area, which show the potential to expand the resource in this area." said Mark Selby, President and CEO of RNC.

Infill drilling highlights from the A Zone extension since RNC's news release dated January 18, 2017 include:

See Table 1 for full assay highlights in the A Zone extension and Figures 1, 2, and 3 for location and proximity to existing development.

Additionally, further definition drilling to support the mine plan in the A Zone has returned strong results for both infilling and extending the known resource, including:

See Table 2 for full assay highlights in the A Zone and Figures 1, 2, and 4 for location and proximity to existing development.

Beta Hunt A Zone Extension
Additional drill holes completed since RNC's news release dated January 18, 2017 highlight the continuity of gold mineralization in the southern extension of the A Zone (see Figure 1), where RNC previously announced the extension the strike length of 1.2 kilometres by a further 500 metres or more than 40%. The southern extension occurs directly below the previously mined contact-related historical Hunt nickel deposit (see Figure 3).

The presence of shear-hosted gold mineralization directly below nickel mineralization is characteristic of the Beta Hunt Mine. In areas of historic nickel mining, this association can be used as a guide to test for gold mineralization below. The mineral potential of this area was first highlighted by WMC in the 1980s. While mining nickel from the Hunt deposit anomalous visible gold was occasionally noted below the ultramafic contact. Historic drill holes in the area also contained anomalous gold. Significant assays from the recent drill holes are provided in Tables 1 and 2.

The disclosure of scientific and technical information contained in this news release has been approved by Alger St-Jean, P. Geo., Vice President Exploration of RNC and Kevin Small, Director, Mining Operations of RNC, both Qualified Persons under NI 43-101.

About RNC
RNC is a multi-asset mineral resource company focused primarily on the acquisition, exploration, evaluation and development of base metal and precious metal properties. RNC's principal assets are the producing Beta Hunt gold and nickel mine in Western Australia, the Dumont Nickel Project located in the established Abitibi mining camp in Quebec and a 30% stake in the producing Reed Mine in the Flin Flon-Snow Lake region of Manitoba, Canada. RNC also owns a majority interest in the West Raglan and Qiqavik projects in Northern Quebec. RNC has a strong management team and Board with over 100 years of mining experience at Inco and Falconbridge. RNC's common shares trade on the TSX under the symbol RNX. RNC shares also trade on the OTCQX market under the symbol RNKLF. 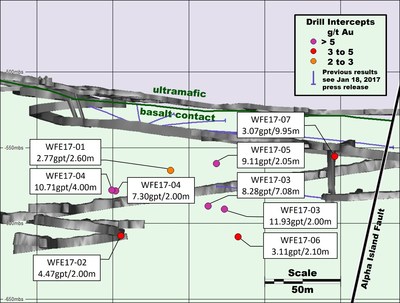 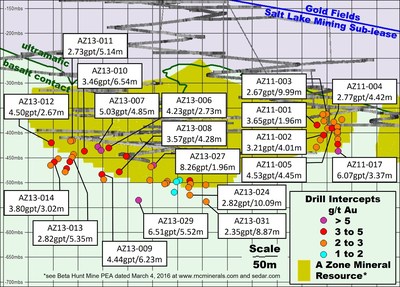