TORONTO, June 20, 2017 /CNW/ - RNC Minerals ("RNC") (TSX: RNX) has achieved commercial gold production at its Beta Hunt Mine in Western Australia by producing at least 3,500 contained ounces of gold over a one month period (equivalent to an annualized production rate of 42,000 ounces). Mine performance has improved significantly to-date during the second quarter with an average gold mining rate of approximately 1,600 tonnes per day, 40% higher than the average in the first quarter of 2017 (see Figure 1). Mined gold grades1 during the period in which commercial production was achieved are in excess of 2.3 g/t, more than 35% higher than average grades in the first quarter.

Mark Selby, President and CEO, commented, "Achievement of commercial production at Beta Hunt is a key milestone. The Beta-Hunt production ramp-up is now on track, with significant improvements in both mining rates and gold grades. Development rates have also improved substantially versus earlier in the year which will allow additional mining areas to be brought into production and continue our gold production ramp-up. I look forward to robust performance at Beta Hunt in the second half of 2017 to deliver our previously announced production guidance in 2017." 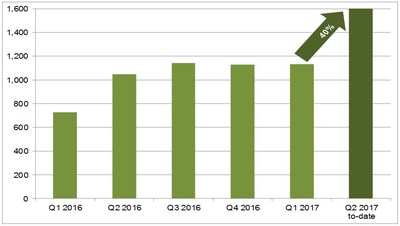 The disclosure of scientific and technical information contained in this news release has been approved by Kevin Small, Director, Mining Operations of RNC, a Qualified Person under NI 43-101.

This news release contains "forward-looking information" including without limitation statements relating to the liquidity and capital resources of RNC, production guidance and the potential of the Beta Hunt and Reed mines.