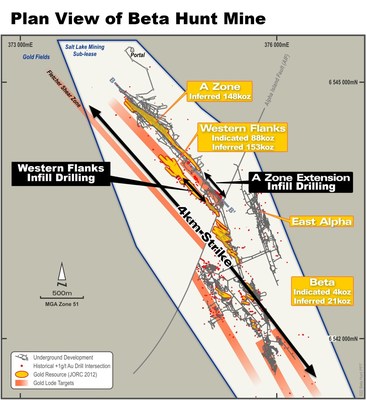 "The latest drill results from the Western Flanks Zone continue to demonstrate the immense potential to multiply the existing gold resource at Beta Hunt. The latest drilling confirms the extension of Western Flanks mineralization at depth in multiple holes, nearly doubling the vertical extent of Western Flanks mineralization to 190 metres below the contact. Current drilling has yielded the best intersections yet in the Western Flanks as hole WF18-028 returned 7.09 g/t gold over a downhole length of 21 meters. Infill drilling at Western Flanks and the A Zone Extension continue to return excellent results in terms of both grade and thickness, and we have added a second drill to allow us to accelerate our resource expansion efforts," said Mark Selby, President and CEO of RNC.

See Figures 1, 2 and 3 showing location and proximity to existing development.

Additionally, further definition drilling to support the mine plan in the A Zone Extension has returned more positive results for defining a resource, including:

See Figure 1 and 4 for location and proximity to existing development.

Additional drill holes completed since RNC's news release dated April 10, 2017 highlight the continuity of gold mineralization in the southern extension of the A Zone where RNC previously announced the extension of the strike length of 1.2 kilometres by a further 500 metres or more than 40%. The southern extension occurs directly below the previously mined contact-related historical Hunt nickel deposit (see Figure 4). Significant assays from the recent drill holes are provided in Tables 1, 2 and 3.

RNC recently added a second diamond drill at Beta Hunt to support infill and exploration drilling plans. Results will continue to be released as assays become available and will be utilized to update resource models.

Table 3: Significant assay results from the A Zone Extension Drilling

The disclosure of scientific and technical information contained in this news release has been approved by Alger St-Jean, P. Geo., Vice President Exploration of RNC and Kevin Small, Director, Mining Operations of RNC, both Qualified Persons under NI 43-101. 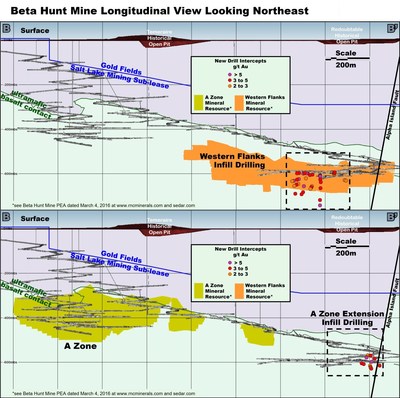 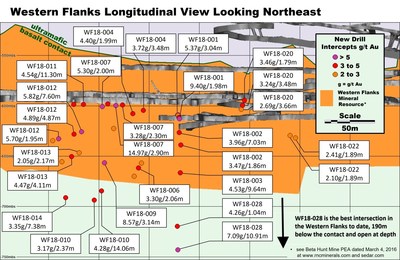 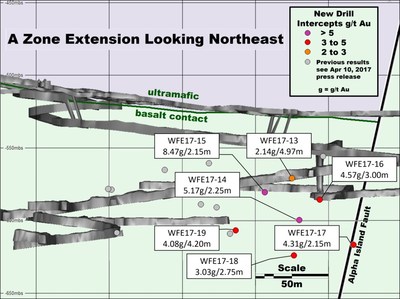