TORONTO, July 19, 2017 /CNW/ - RNC Minerals Corporation's ("RNC") (TSX: RNX) 68% owned subsidiary True North Nickel ("TNN") is pleased to report that the 2017 field program at its high grade gold Qiqavik project in northern Quebec has commenced. The program will include a minimum of 2,500 metres of a diamond drilling campaign to follow up on two separate high grade surface gold discoveries at the Esperance and Aurora zones The discoveries were made during the 2016 program in which multiple grab samples returned assay results ranging from 5 g/t up to 189 g/t gold and up to 10% copper over 1.6km and 400m strike lengths, respectively (see RNC news release dated December 13, 2016).

Mark Selby, President and CEO of RNC, commented, "Qiqavik hosts a 40 km high grade gold and copper grab sample trend and has the potential to be a district-scale gold discovery in a previously unrecognized gold belt in northern Quebec. We are pleased to commence the drilling campaign on the Qiqavik property to test our high priority, high grade gold (up to 198g/t Au) and copper (up to 10.2% Cu) targets at the Aurora and Esperance trends which are co-incident with well-defined IP anomalies. We are also excited, given the success of our 2016 season, to conduct further grass roots prospecting on Qiqavik and follow up a long list of high grade gold showings to generate further targets in the 2017 field season."

At Qiqavik, the 2017 field program will include drilling to test high grade gold surface showings co-incident with high priority induced polarization (IP) anomalies at Esperance and Aurora. Additionally, fieldwork will focus on the expansion of IP grids to cover the possible extension of the high-grade gold and copper Esperance and Aurora zones which remain open to both the east and west, mapping of these zones to improve the understanding of the structures and associations, and prospecting to identify new targets and follow-up on existing regional targets.

Along with Qiqavik, TNN's other highly prospective exploration properties – West Raglan and the Carolina Gold Belt properties – are on track to be spun-out into a separately listed TSX-V issuer, Orford Mining Corporation, during August 2017. RNC will continue to provide our shareholders with exposure to these highly prospective exploration assets through our ownership interest in Orford, while minimizing future funding dilution at the RNC level. Osisko Mining Inc. and Premier Gold Mines Limited have agreed to become shareholders of Orford upon the closing of the spin-out transaction. 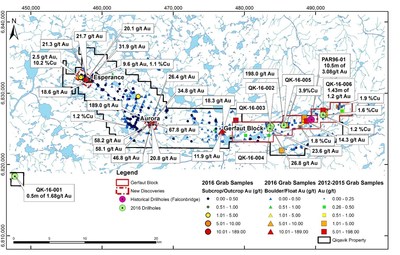 Qualified Person and Quality Assurance and Quality Control
The disclosure of the technical information contained in this news release has been approved by Alger St-Jean, P. Geo., Vice President Exploration of RNC, and a Qualified Person under NI 43-101.

Orford Mining Corporation
RNC expects to transfer its 68% interest in TNN's exploration assets to Focused Capital Corp. ("Focused") as a result of an amalgamation (the "Amalgamation") to be implemented under an amalgamation agreement to be entered into by Focused and TNN. Following the Amalgamation, which is expected to be completed in August 2017, the resulting issuer will hold all of TNN's assets and will be renamed Orford Mining Corporation ("Orford").The Amalgamation will qualify as Focused's "Qualifying Transaction" pursuant to Policy 2.4 of the TSX Venture Exchange Inc. (the "Exchange"). Subject to satisfying certain conditions and approvals, the resulting issuer, Orford, will be listed for trading on the Exchange under the symbol "ORM". The Amalgamation and listing of Orford is expected to close in August 2017.

About Royal Nickel Corporation
RNC is a multi-asset mineral resource company with a portfolio of gold and base metal production and exploration properties. RNC's principal assets are the producing Beta Hunt gold and nickel mine in Western Australia, a 50% interest in a nickel joint venture with Waterton that holds the Dumont Nickel Project in the Abitibi region of Quebec, and a 30% stake in the producing Reed Mine in the Flin Flon-Snow Lake region of Manitoba, Canada. RNC also owns a majority interest in the West Raglan and Qiqavik projects in Northern Quebec. RNC has a strong management team and Board with over 100 years of mining experience at Inco and Falconbridge. RNC's common shares trade on the TSX under the symbol RNX. RNC shares also trade on the OTCQX market under the symbol RNKLF.

This news release contains "forward-looking information" including without limitation statements relating to the potential of the Qiqavik, West Raglan and Carolina Gold Belt properties.