TORONTO, Sept. 26, 2017 /CNW/ - RNC Minerals' ("RNC") (TSX: RNX) 67% owned subsidiary, True North Nickel ("TNN"), is pleased to provide an update regarding the 2017 gold exploration program at its high-grade gold Qiqavik Project. Along with Qiqavik, TNN's other highly prospective exploration properties, West Raglan and the Carolina Gold Belt properties, are on track to be spun-out in October 2017 (the "Spin-Out") into a separately listed TSX-V issuer to be named Orford Mining Corporation (trading under the ticker symbol "ORM").

RNC also announces, jointly with Focused Capital Corp. ("Focused"), that a meeting of Focused common shareholders has been scheduled for 10:00 a.m. (Toronto time) on October 20, 2017 to, among other things, consider and vote on the Spin-Out transaction. Focused has mailed a notice of meeting, management information circular and form of proxy in connection with, among other things, the Spin-Out transaction and related change of its name to Orford Mining Corporation. Focused has also filed technical reports on the Qiqavik and West Raglan projects under its SEDAR profile. The technical reports will also be filed under RNC's SEDAR profile.

Mark Selby, President and CEO, commented, "I am pleased that the planned spin-out of RNC's exploration assets held by TNN is expected to be completed next month. I am anticipating the assay results from drilling completed during the Summer Qiqavik exploration program. Visible gold in quartz veins was observed in one of the drill holes at the Aurora target and a new sulphide mineralized shear zone discovered at surface in the Central Zone was shown by drilling to extend at depth. Assay results expected next month will confirm whether or not these structures contain significant gold mineralization."

True North Nickel has completed the 2017 field exploration program on the Qiqavik Property. This program consisted of diamond drilling of 2,723 metres in 23 holes (Table 1), 721 line-kilometres of airborne (drone) magnetic surveying and 105.6 line-kilometres of Abitibi Geophysics ground OreVisionTM IP surveying, prospecting, mapping, surface rock sampling, and till sampling (Figure 1). This work led to better understanding of the occurrences discovered in 2016 (figure 2) and to the identification of many additional mineralized occurrences on the property, including two occurrences with visible gold.

Core samples from drilling and surface sampling in 2017 have been shipped to the analytical laboratory, but no assay data has yet been received. Assay results are expected to be received and published before the end of October 2017.

Drilling has confirmed the subsurface occurrence of structures associated with the 2016 gold discoveries at Esperance and Aurora.  Although visible gold was observed in quartz veining in one of the holes at Aurora (QK-17-009), assay results from this drilling are pending and it is not possible to state at this time whether these structures contain significant gold mineralization. A new sulphide mineralized and silicified shear zone discovered at surface in the Central Zone was shown by drilling to extend at depth.  Assay results from this newly discovered occurrence are also pending. Surface prospecting has led to the discovery of two new visible gold occurrences in float at Aurora West and at Gerfaut (Figure 1). 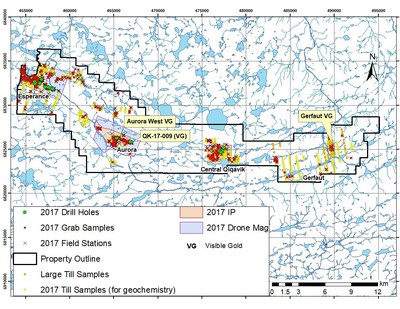 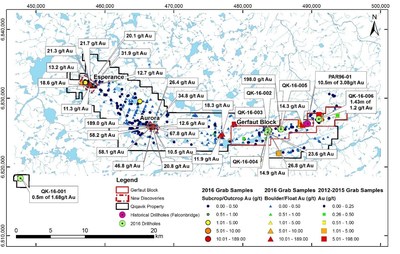 The technical information in this news release was reviewed and approved by Alger St-Jean, P. Geo., a qualified person (QP) for the purposes of NI 43-101.

Information about the Focused Special Meeting

Each person who was a holder of record of Focused common shares at the close of business on August 28, 2017 is entitled to receive notice of, and to attend and vote at, the Special Meeting, and any adjournment or postponement thereof. Focused has received a confirmation of mailing from its transfer agent, Computershare Investor Services Inc. ("Computershare").

The meeting materials are available for review under Focused's profile at www.sedar.com.

About RNC Minerals
RNC is a multi-asset mineral resource company with a portfolio of gold and base metal production and exploration properties. RNC's principal assets are the producing Beta Hunt gold and nickel mine in Western Australia, a 50% interest in a nickel joint venture with Waterton that holds the Dumont Nickel Project in the Abitibi region of Quebec, and a 30% stake in the producing Reed Mine in the Flin Flon-Snow Lake region of Manitoba, Canada. RNC also owns a majority interest in the West Raglan and Qiqavik projects in Northern Quebec. RNC has a strong management team and Board with over 100 years of mining experience at Inco and Falconbridge. RNC's common shares trade on the TSX under the symbol RNX. RNC shares also trade on the OTCQX market under the symbol RNKLF.

The information provided in this news release regarding TNN, RNC and the Resulting Issuer, has been provided by TNN and RNC and has not been independently verified by Focused.

Investors are cautioned that, except as disclosed in the management information circular or filing statement to be prepared in connection with the transaction, any information released or received with respect to the Qualifying Transaction may not be accurate or complete and should not be relied upon. Trading in the securities of a capital pool company should be considered highly speculative.

The Exchange has in no way passed upon the merits of the proposed transaction and has neither approved nor disapproved the contents of this news release.

This news release contains "forward-looking information" including without limitation statements relating to the liquidity and capital resources of RNC, potential of the Qiqavik, West Raglan, Jones-Keystone Loflin and Landrum-Faulkner exploration properties.

Forward-looking statements involve known and unknown risks, uncertainties and other factors which may cause the actual results, performance or achievements of RNC to be materially different from any future results, performance or achievements expressed or implied by the forward-looking statements. Factors that could affect the outcome include, among others: future prices and the supply of metals; the results of drilling; inability to raise the money necessary to incur the expenditures required to retain and advance the properties; environmental liabilities (known and unknown); general business, economic, competitive, political and social uncertainties; accidents, labour disputes and other risks of the mining industry; political instability, terrorism, insurrection or war; or delays in obtaining governmental approvals, projected cash costs, failure to obtain regulatory or shareholder approvals. For a more detailed discussion of such risks and other factors that could cause actual results to differ materially from those expressed or implied by such forward-looking statements, refer to RNC's filings with Canadian securities regulators, including the most recent Annual Information Form, available on SEDAR at www.sedar.com.