TORONTO, Nov. 28, 2018 /CNW/ - RNC Minerals (TSX: RNX) (RNC) is pleased to announce that it has taken a number of steps to focus its efforts on unlocking the high grade gold potential of the Beta Hunt Mine.

Mark Selby, President and CEO of RNC, commented "We are now positioned to unlock Beta Hunt's tremendous potential, through drilling and development focused on high grade coarse gold areas in both of the newly discovered sediment layers that host our Father's Day Vein discovery, and the high grade coarse gold found adjacent to the Mine's nickel deposits. RNC's technical services team has recently completed its initial interpretation of the sediment layer in the much larger Western Flanks shear (relative to the A Zone where the Father's Day vein was discovered) providing a second, larger target area to potentially find more high grade coarse gold in close proximity to our existing infrastructure. I look forward to continuing to mine more high grade gold through 2019 and completing the exploration and development work to provide the foundation for a larger, more robust and profitable mining operation."

RNC has initiated a 40,000 metre drill program focused on expanding the known coarse gold areas while expanding and increasing confidence in the bulk tonnage shear hosted resource. Three drills are now currently operating. The first phase of the drilling campaign is expected to be completed by April 2019 with a resource update anticipated for the second quarter of 2019.

In order to focus on high grade coarse gold production and deliver the first phase of the exploration plan, we have temporarily ramped down our bulk production mining to allow us to adequately drill off the main shear zone resources and complete an updated resource estimate.

The first drill is targeting the expansion and drill definition of the sediment layer in the shear zone associated with the 'Father Days Discovery" in the A Zone area of the Beta Hunt Mine where the majority of the coarse gold production has occurred in 2018. Drilling will step out along strike and both above and below dip of the known discovery area following the pyritic sediment horizon in the Lunnon Basalt, which has currently been identified over a strike length of 540 metres and remains open in all directions.

The geology team has recently undertaken a review of the drilling completed in 2017 and identified a sediment layer intersected in close proximity to the much larger Western Flanks shear (see figure 2). A total of four holes from 2017 drilling have intersected the sediment layer. The current interpretation indicates a strike length of 230 metres that remains open in all directions.

An indication of the potential for higher grades at depth in Western Flanks was highlighted by one of the deeper holes drilled to date - previously reported WF18-028 in Western Flanks which intersected  a grade of 7.09 g/t Au over 21 metres (including 31.6 g/t Au over 0.3 metres and 56.1 g/t Au over 0.5 metres). The newly interpreted sediment is approximately 60m north of this drill hole.

The second drill has been located at the northern end of the Western Flanks shear targeting definition drilling of the main shear and the recently identified sediment layer. 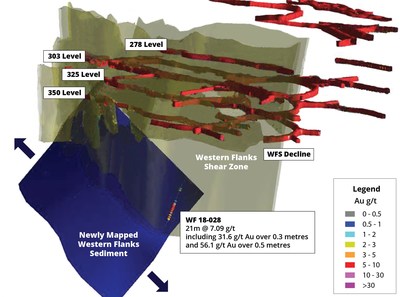 The first phase of exploration, focused initially on the north side of the Alpha Island Fault, represents only a portion of the high grade potential of the Beta Hunt Mine (Figure 4).

Exploration drilling planned for later in 2019 will target the southern side of the Alpha Island Fault where the majority of the previous nickel mining was undertaken. This includes areas where RNC has already mined high grade coarse gold in five different locations (see Figure 3). As well, the south side of the Alpha Island Fault contains a large number of intersections from historic drilling over a 45-year period throughout the mine (largely targeting nickel and not gold) that intersected high grade gold. The Beta Hunt property contains 18 intersections with gold grades of over 300 g/t and a total of 46 intersections with gold grades of over 100 g/t (see Figure 4) further highlighting Beta Hunt's high grade potential. 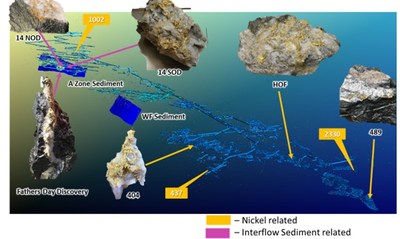 The scale in this oblique view varies.  The distance from the north end to the south end of the workings is approximately 4km. See figure 4 plan view for true scale.  Photos of coarse gold specimens are not to scale and are shown for illustrative purposes only. RNC has a 100% interest in the producing Beta Hunt gold mine located in Western Australia where a significant high grade gold discovery - "Father's Day Vein" - was recently made. RNC has initiated a 40,000 metre drill program on near mine exploration targets focused on the Father's Day Vein area, results of which will be incorporated into an updated NI 43-101 compliant Mineral Resource Estimate targeted for Q2 2019. Beta Hunt gold resource potential is underpinned by multiple gold shears with gold intersections across a 4km strike length which remain open in multiple directions adjacent to an existing 5km ramp network. RNC also has a 28% interest in a nickel joint venture that owns the Dumont Nickel-Cobalt Project located in the Abitibi region of Quebec which contains the second largest nickel reserve and eighth largest cobalt reserve in the world. RNC owns a 35% interest in Orford Mining Corporation, a mineral explorer focused on highly prospective and underexplored areas of Northern Quebec and the U.S. Carolina Gold Belt. RNC has a strong management team and Board with over 100 years of mining experience. RNC's common shares trade on the TSX under the symbol RNX. RNC shares also trade on the OTCQX market under the symbol RNKLF. 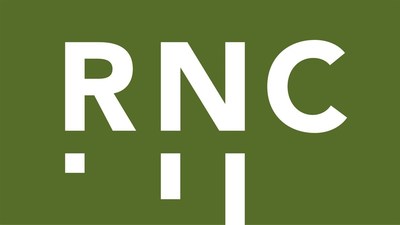