TORONTO, June 27, 2019 /CNW/ - RNC Minerals (TSX: RNX) ("RNC") is pleased to announce a substantial increase to the mineral resource for the Western Flanks Zone at its Beta Hunt Gold Mine in Western Australia based on an updated mineral resource estimate effective as of June 26, 2019.

The recently completed resource definition drilling program at Beta Hunt has significantly added to the resource base of the mine by upgrading and extending the mineral resources at Western Flanks (Table 1). A total of 16,876 metres of drilling in 144 drill holes were completed at Western Flanks during the current grade control, resource definition and exploration drilling program. Mineralization at Western Flanks has now been defined across a 1.2 km strike length and to a depth of 150 to 250 metres below the basalt contact. The increase in resource was achieved at a discovery cost of less than $5 per ounce.

"This increase in resource size is an outstanding result and confirms the exploration potential we always believed existed at Beta Hunt. Today's 710 koz Measured and Indicated resource with a further 250 koz Inferred resource comes from just over one kilometer of strike length on a single shear complex in the Western Flanks, which we believe represents only a fraction of the mine's overall potential," said Mark Selby, President and CEO of RNC Minerals. "I look forward to the results of the remaining 5,000 metres of the current exploration program now underway which will begin testing the other three shears that occur over a potential strike length of more than four kilometres and where gold mineralization has been outlined by historic drilling."

Mineral Resource Estimate
The Measured and Indicated Mineral Resources for the Western Flanks Zone at the Beta Hunt Mine increased significantly compared to the prior Indicated Resources estimate of December 31, 2017 as a result of infill and exploration diamond drilling completed since that date.

The following table presents the Western Flanks Mineral Resource Estimate as of June 26, 2019: 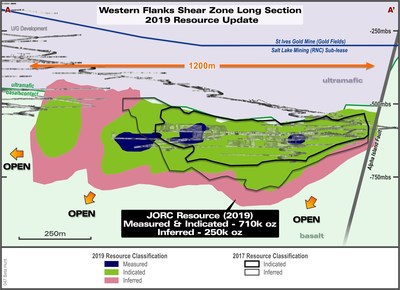 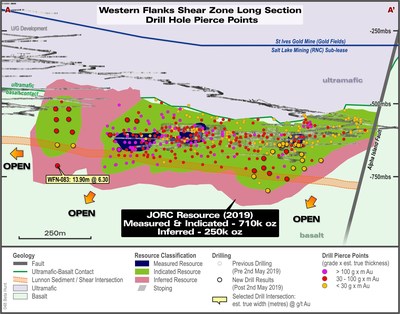 A lower cut-off grade of 1.6g/t Au was used for reporting purposes and reflects lower milling costs that are a result of owning our own mill, lower mining costs and a higher gold price when compared to the 1.8g/t Au cut-off used for the 2017 Mineral Resource estimate.

The grade-tonnage curve shown below (Figure 3) shows the impact of varying cut-off grades for this deposit. For example, using a 1.8 g/t Au cut-off as used in the 2017 Western Flanks Resource estimate yields:

Which compares to the 2017 Western Flanks Indicated resource estimate at 1.8 g/t cut-off of: 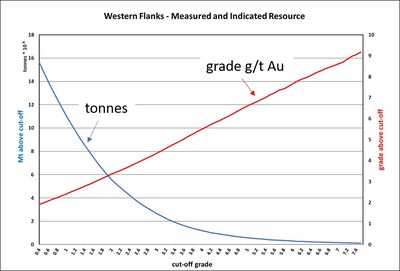 The high-grade coarse Father's Day style gold occurrences associated with the Shear Zone/Lunnon Sediment intersection horizon are not represented in the resource model due to the extreme nuggety nature of this type of bonanza mineralization. These occurrences are best considered as a potential periodic significant bonus to mine production.

Resource definition drilling at the A Zone consisting of 21,951 metres of drilling in 184 holes was completed on June 20, 2019. An update of the Mineral Resource for the A Zone is currently being performed.

The updated Mineral Resource estimate for both Western Flanks and the A Zone will be detailed in a technical report prepared in accordance with NI 43-101 to be filed on SEDAR within 45 days of this press release.

On the basis of these resource estimate updates, RNC Minerals plans to define and publish a gold reserve estimate at Beta Hunt mine that we expect will support resumption of full-scale production at Beta Hunt in Q3 2019.

Expansion Potential
The successful definition of significant mineral resources along the Western Flanks shear zone highlights the exploration potential of the other shears on the property including the fault offset of the mineralized shear system to the south of the Alpha Island Fault (Figure 4). Historical drilling has demonstrated that these shears contain gold mineralization. Ongoing exploration is focusing on this potential. 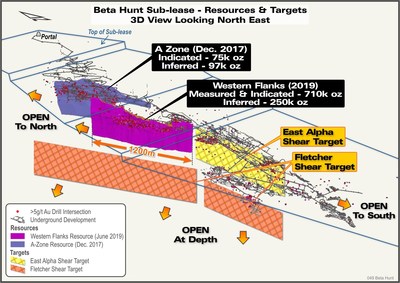 Compliance Statement (JORC 2012 and NI 43-101)
The Mineral Resource estimates set out in this release have been prepared using accepted industry practice and classified in accordance with the JORC Code, 2012 Edition by Paul Ellison, MAusIMM, under the supervision of Stephen Devlin, FAusIMM. Both are employees of Salt Lake Mining Pty. Ltd (SLM), a 100% owned subsidiary of RNC Minerals.

Mr. Ellison is a Senior Geologist for SLM and has sufficient experience that is relevant to the style of mineralization and type of deposit under consideration and to the activity being undertaken to qualify as a Competent Person as defined in the JORC Code, 2012 Edition.

Mr. Devlin is Vice President Exploration and Growth for SLM and has sufficient experience that is relevant to the style of mineralization and type of deposit under consideration and to the activity being undertaken to qualify as a Competent Person as defined in the JORC Code, 2012 Edition and fulfils the requirements to be a "Qualified Person" for the purposes of NI 43-101.

Mr. Devlin has reviewed and approved the disclosure of the technical information included in this news release.

Drill core sampling was conducted by SLM personnel. Samples are shipped to SGS Mineral Services of Kalgoorlie for preparation and assaying by 50 gram fire assay analytical method. All diamond drilling samples submitted for assay will include at least one blank and one Certified Reference Material ("CRM") per batch, however small the batch of drillhole samples, plus one CRM or blank every 20 samples. In samples with observed visible gold mineralization, a coarse blank is inserted after the visible gold mineralization to serve as both a coarse flush to prevent contamination of subsequent samples and a test for gold smearing from one sample to the next which may have resulted from inadequate cleaning of the crusher and pulveriser. The lab is also required to undertake a minimum of 1 in 20 wet screens on pulverised samples to ensure a minimum 90% passing at -75µm.  Where problems have been identified in QAQC checks, SLM personnel and the SGS laboratory staff have actively pursued and corrected the issues as standard procedure.

About RNC
RNC has a 100% interest in the producing Beta Hunt gold mine located in Western Australia where a significant high-grade gold discovery - "Father's Day Vein" - was made. Beta Hunt gold resource potential is underpinned by multiple gold shears with gold intersections across a 4 km strike length which remain open in multiple directions adjacent to an existing 5 km ramp network. RNC has a 100% interest in the Higginsville Gold Operation in Western Australia, which is comprised of a low cost 1.3 Mtpa gold mill and a substantial portfolio of gold tenements. In addition, RNC owns a 28% interest in a nickel joint venture that owns the Dumont Nickel-Cobalt Project located in the Abitibi region of Quebec which contains the second largest nickel reserve and ninth largest cobalt reserve in the world. RNC also owns a 27% interest in Orford Mining Corporation, a mineral explorer focused on highly prospective and underexplored areas of Northern Quebec. RNC has a strong management team and Board with over 100 years of mining experience. RNC's common shares trade on the TSX under the symbol RNX. RNC shares also trade on the OTCQX market under the symbol RNKLF.

This news release contains "forward-looking information" including without limitation statements relating to the mineral resource estimates and the potential of the Beta Hunt Mine. 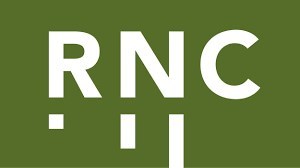