Note 1: The accuracy of this estimate at this stage is considered to be +10%/-25% as it is based on the measurement of the estimated gold content for each of the samples by specific gravity determinations. This occurrence is not necessarily representative of continued mineralization. Further, such estimates cannot be interpreted with the same confidence as assay results.

Paul Andre Huet, Chairman & CEO, commented: "We are excited to announce another coarse gold occurrence at Beta Hunt, which supports our existing coarse gold model used to identify the geological setting in which potential coarse gold is expected to occur. As we have previously stated, we do not include coarse gold in our reserves, nor do we incorporate it into our mine plan. While these occurrences are certainly welcome, they are best considered as a potential periodic significant bonus on top of our ongoing economic mine production at the base reserve grade.

During this year, we have demonstrated three consistent quarters of highly profitable mining at Beta Hunt, with no coarse gold occurrences, which is a testament to the evolution of our operations and Karora as a business. Our recent track record of reducing costs and improving efficiencies has led to Beta Hunt providing a reliable and predictable contribution to our production profile and has attracted strong institutional quality investor interest in Karora. We will continue with our strategy to mine Beta Hunt in a systematic, efficient manner based on our reserve grade mine plan while ensuring, through our complete extraction of the shear zone, that we do recover coarse gold occurrences in the sediment-hosted zone where they are most likely to occur.

Additionally, over the course of this year we have proactively enhanced security protocols at Beta Hunt associated with the handling of coarse gold via immediate and secure transport for safe storage until it is processed and sold.

Over the remainder of this year, we look forward to updating the market on our ongoing drill programs, our third quarter financial results, as well as a comprehensive reserve and resource update across our operations."

Figure 1: Quartz rock containing coarse gold in the A Zone. As previously outlined, at Beta Hunt coarse gold mineralization (> 1% Au) is associated with the basalt/ultramafic contact and with an interflow sediment within the Lunnon Basalt where it intersects the main shear zones. Based on more recent mining of the A Zone, underground mapping and drill hole interpretation, Beta Hunt geologists have confirmed the coarse gold mineralization to be controlled by the intersection of the main mineralized shear zones (A Zone and Western Flanks) and the Lunnon interflow sediment which is a narrow, iron sulphide-rich unit that occurs approximately 150 metres stratigraphically below the ultramafic/basalt contact. The intersection of the steep dipping shear zones with the shallow, west- dipping Lunnon sediment is interpreted to produce a shallow, north plunging zone that may contain "pockets" of coarse gold.

This model was applied to the sedimentary unit at A Zone which intersected the interpreted north plunging potential "coarse gold" zone (see Figure 2). Ore drives in the A Zone resource area have intersected sediment associated coarse gold (an estimated 2,000 ounces – see Note 1 above), providing strong ongoing support and reinforcement of the previously developed geological model. In addition to being applied to A zone and Western Flanks, this model is interpreted to apply to the other parallel mineralized shear zones at Beta Hunt.

Figure 2: Face of ore drive in sedimentary horizon on A Zone shear. Coarse gold is found on the margin of the shear-related quartz vein in contact with the pyrite-rich Lunnon sediment. 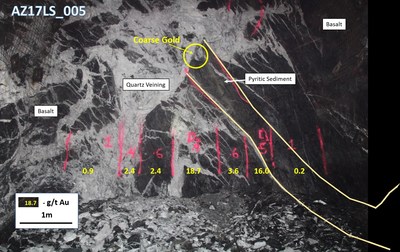 The disclosure of scientific and technical information contained in this news release has been approved Stephen Devlin, FAusIMM, Group Geologist, Karora Resources Inc., a Qualified Person for the purposes of NI 43-101.

The recovered coarse gold quantities were determined and compiled at the Beta Hunt mine site by Beta Hunt Mine staff who are full time employees of Karora Resources Inc.

Gold content of rock specimens containing coarse gold was determined using the non-destructive specific gravity method according to the calculation shown in Figure 3.

The error in this estimation method is primarily related to the estimation of Host Rock SG.  The values determined for Au_g is considered to be accurate within a range of +10% to -25% of the determined value.

Wall samples are collected as rock chips using a G-pick along a horizontal sample traverse. Samples are shipped to SGS Mineral Services of Kalgoorlie for preparation and assaying by 50 gram fire assay analytical method. All rock chip samples are submitted with at least one CRM (standard) every 20 samples. In samples with observed visible gold mineralization, a coarse blank is inserted after the visible gold mineralization to serve as both a coarse flush to prevent contamination of subsequent samples and a test for gold smearing from one sample to the next which may have resulted from inadequate cleaning of the crusher and pulveriser. Where problems have been identified in QAQC checks, Karora personnel and the SGS laboratory staff have actively pursued and corrected the issues as standard procedure.

Karora is focused on growing gold production and reducing costs at its integrated Beta Hunt Gold Mine and Higginsville Gold Operations ("HGO") in Western Australia. The Higginsville treatment facility is a low-cost 1.4 Mtpa processing plant which is fed at capacity from Karora's underground Beta Hunt mine and open pit Higginsville mine. At Beta Hunt, a robust gold mineral resource and reserve is hosted in multiple gold shears, with gold intersections along a 4 km strike length remaining open in multiple directions. HGO has a substantial historical gold resource and highly prospective land package totaling approximately 1,800 square kilometers. Karora has a strong Board and management team focused on delivering shareholder value. Karora's common shares trade on the TSX under the symbol KRR. Karora shares also trade on the OTCQX market under the symbol KRRGF.

This news release contains "forward-looking information" including without limitation statements relating to the potential of the Beta Hunt Mine, Higginsville Gold Operation and Spargos Reward Gold Project.

Forward-looking statements involve known and unknown risks, uncertainties and other factors which may cause the actual results, performance or achievements of Karora to be materially different from any future results, performance or achievements expressed or implied by the forward-looking statements. Factors that could affect the outcome include, among others: future prices and the supply of metals; the results of drilling; failure to discover additional significant amounts of coarse gold; inability to raise the money necessary to incur the expenditures required to retain and advance the properties; environmental liabilities (known and unknown); general business, economic, competitive, political and social uncertainties; results of exploration programs; accidents, labour disputes and other risks of the mining industry; political instability, terrorism, insurrection or war; or delays in obtaining governmental approvals, projected cash operating costs, failure to obtain regulatory or shareholder approvals. For a more detailed discussion of such risks and other factors that could cause actual results to differ materially from those expressed or implied by such forward-looking statements, refer to Karora 's filings with Canadian securities regulators, including the most recent Annual Information Form, available on SEDAR at www.sedar.com.