Paul Andre Huet, Chairman & CEO, commented: "We are very pleased to announce significant increases, net of mining depletion, to our Beta Hunt Mineral Resource in the M&I category to 19,600 nickel tonnes and 13,200 nickel tonnes in the Inferred category. In particular, the addition of the maiden Mineral Resource for the Gamma Zone, highlighted by the 50C nickel discovery which we have moved rapidly from discovery in April 2021 (see Karora news release dated April 6, 2021) into Mineral Resource in just over one year. This is yet another example, as with our Larkin Gold Resource, of the tremendous advantage we have at Beta Hunt with respect to leveraging existing underground development. In fact, our +400km of existing underground development at Beta Hunt would cost over A$2Bn at today's development prices to put in place. The most exciting part of our new Nickel Resource is that the 50C discovery has only been delineated over a strike length of 800 metres – the zone remains wide open for a potential strike length of up to 2.6 kilometres. Certainly an exciting prospect for future growth.

Our success in expanding the Beta Hunt Nickel Mineral Resource underpins our plans to substantially increase our nickel production from the expected 2022 output of between 450 and 550 payable nickel tonnes to materially higher levels in the future. We are currently in the process of completing a preliminary economic assessment ("PEA") to evaluate the potential of this expanded Gamma Zone at Beta Hunt with a view to materially increasing the by-product credit potential to reduce our gold AISC costs in future. Given the significant strike length left to explore south of Gamma, this initial PEA is just that – only the beginning of the expanded nickel story at Beta Hunt."

In February, 2022, AMC Consultants Pty Ltd, Perth (AMC) were contracted to produce resource estimates for the 30C and 40C nickel sulphide deposits in the Beta Block and the Gamma Block nickel sulphide deposits, taking into account the recently completed drilling. The new Nickel Mineral Resource which incorporates all of Beta Hunt's nickel deposits, including those updated by AMC, is shown in Table 1 below.

Note: Refer to detailed footnotes below

The new Nickel Resource incorporates updates to the 10C1. and 30C resources plus a small, new trough, the 40C.  The bulk of the increased resources is due to the addition of the 50C Trend which makes up 22% (4,300 Ni tonnes) of the Measured and Indicated Mineral Resource and 29% (3,800 Ni tonnes) of the Inferred Mineral Resource. The Beta Hunt Nickel Mineral Resource estimate is net of mine production depletion of 7k tonnes grading 3.0% Ni for 211 Ni tonnes over the period October 1, 2020 to January 31, 2022. The depletion is from the Beta Southwest resource.

The new Nickel Resource marks the most significant increase since February 2016 when the Corporation acquired the private company Salt Lake Mining Pty Ltd, previous owners of the Beta Hunt mine (see KRR news release, Feb 1,2016). The major contributor to the increase in Mineral Resources is the 50C Nickel Trend which was discovered by Karora in 2021 (see KRR news release, April 6, 2021).

Nickel exploration and resource definition activities at Beta Hunt in 2021 were concentrated on the newly discovered 50C Trend in the Gamma Block, supplemented by infill and extensional diamond drilling of the 30C nickel trough contained within the Beta Block primarily above the Larkin Gold Zone.

The 50C Trend was drilled as fans from underground drill cuddies along the Beta Return Ingress (BRI), a drive that extends from the Beta Block into the Gamma Block for a distance of 150 metres. Drilling was targeted at both infilling and extending the new nickel mineralization as well as infilling the existing 10C mineral resource that occurs along the eastern flank of the 50C Trend. Drilling was aimed at upgrading the 10C mineral resource and defining a maiden mineral resource for the 50C Trend. The 50C mineralized trend was discovered in early 2021 as part of a drill program based on an assessment and geological review of the area by Karora's exploration team and was co-funded by the Western Australian Government as part of its co-funded Exploration Incentive Scheme (see KRR news release, April 6, 2021).

Both the 10C and 50C Trends remain open along strike to the southeast with potential to extend a full 2.6 kilometres of strike to the sub-lease boundary. This potential is highlighted by historical surface drill hole LD4022 which intersected 9.5 metres (downhole) @ 11.4% Ni, 400 metres southeast along strike of the new mineral resource, as shown below in Figure 1(a). Additionally, see KRR release dated Oct 8, 2021 for more information. 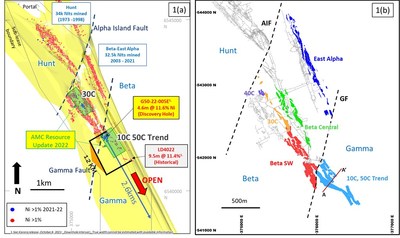 The 30C drilling infilled and extended the prior Mineral Resource (included in the Corporation's Technical Report dated February 1, 2021 under Karora's profile at www.sedar.com).

For the remainder 2022, drilling for nickel mineralization will focus on extending and upgrading the Gamma Block resources with drilling facilitated by a 300m extension of the existing BRI. The extension requires an upgrade to the vent infrastructure to be completed in Q3, 2022. Drilling from the BRI extension is expected to commence in Q4, 2022.  Drilling will also continue to extend and upgrade existing resources in the Beta Block. In addition, surface exploration drilling is aimed at testing for a new interpreted trough west of the known Beta nickel mineralization. The target is referred to as the N90C with drilling expected to commence in Q4, 2022. This drilling is a co-funded program with the Western Australian State Government under their Exploration Incentive Scheme (EIS).

Note: Refer to detailed footnotes below

The first-ever Nickel Mineral Resource was completed for the 50C Trend which comprises three nickel deposits known as the 50C, 55C and 95F. These deposits make up a zone of northwest trending nickel mineralization located on the western margin of the 10C nickel resource (Figure 2a). The 50C Trend totals Measured and Indicated, 153k tonnes grading 2.8% Ni (4,300 Ni tonnes) and Inferred 124k tonnes grading 3.1% Ni (3,800 Ni tonnes). The Mineral Resource is bounded to the north by the Gamma Fault (GF) in the Gamma Block at the southern end of the Beta Hunt mine.  The 50C Trend is interpreted as part of the southern off-set extension to Beta Block nickel mineralization which occurs north of the Gamma Fault.

Nickel mineralization is predominantly contact style massive sulphides that lie on the base of the Kambalda Komatiite. Thrust related massive nickel mineralization is associated with local thrust disruptions in the ultramafic and in some instances these nickel sulphides overlay sediment units. The 50C is adjacent to the 55C and 10C nickel troughs that are within an area known as the Gamma Block. The Gamma Block is bounded to the north by the Gamma Fault which is a south-side up-fault zone. Nickel sulphides are defined over a broad zone of almost continuous mineralization, up to 150m across strike, located 80m above and west of the BRI.

The Mineral Resource for those Beta Hunt nickel deposits which were updated, including those that make-up the 50C Trend, was undertaken by AMC Consultants Pty Ltd (AMC) using Micromine software. The Gamma Block, which includes the 50C Trend, nickel sulphide deposits modelled by AMC are shown in Figure 2. Nickel grade estimation was completed using an accumulation (or seam) modelling method and ordinary kriging (OK). This estimation approach was considered appropriate based on review of several factors, including the estimated true thickness of the mineralization, the variable thicknesses of the mineralization and drillhole intercepts and the variety of angles that the drillholes intersected the mineralization. The estimation was constrained with geological and mineralization interpretations. Grade estimation was validated using visual inspection of interpolated block grades vs sample data, and swath plots.

The Mineral Resource classification is based on preliminary passes which take into account number of drill hole intersections (≥ 4, Indicated; ≥ 2 Inferred) supported by an assessment of confidence levels of key criteria which include data quality, grade continuity, structural continuity and drill spacing.

Mr. Stephen Devlin is Group Geologist for Karora, a full time employee of Karora and a Fellow of the AusIMM. Mr Devlin has sufficient experience that is relevant to the style of mineralization and type of deposit under consideration and to the activity being undertaken to qualify as a Competent Person as defined in the JORC Code, 2012 Edition, and fulfils the requirements to be a "Qualified Person" for the purposes of NI 43-101. Mr Devlin has reviewed and approved the disclosure of the technical information for the Beta Hunt Nickel Mineral Resource included in this news release.

Detailed Footnotes relating to Mineral Resource Estimates as at January 31,2022
About Karora Resources

Karora is focused on increasing gold production to a targeted range of 185,000-205,000 ounces by 2024 at its integrated Beta Hunt Gold Mine and Higginsville Gold Operations ("HGO") in Western Australia. The Higginsville treatment facility is a low-cost 1.6 Mtpa processing plant, expanding to a planned 2.5 Mtpa by 2024, which is fed at capacity from Karora's underground Beta Hunt mine and Higginsville mines. At Beta Hunt, a robust gold Mineral Resource and Reserve is hosted in multiple gold shears, with gold intersections along a 4 km strike length remaining open in multiple directions. HGO has a substantial Mineral gold Resource and Reserve and prospective land package totaling approximately 1,900 square kilometers. The Company also owns the high grade Spargos Reward project, which came into production in 2021. Karora has a strong Board and management team focused on delivering shareholder value and responsible mining, as demonstrated by Karora's commitment to reducing emissions across its operations. Karora's common shares trade on the TSX under the symbol KRR and also trade on the OTCQX market under the symbol KRRGF.

This news release contains "forward-looking information" including without limitation statements relating to the liquidity and capital resources of Karora, production guidance and the potential of the Beta Hunt Mine, Higginsville Gold Operation, the Aquarius Project and the Spargos Gold Project.