TORONTO, March 7, 2017 /CNW/ - RNC Minerals (TSX: RNX) ("RNC") is pleased to announce that its 68% owned subsidiary, True North Nickel Inc. ("TNN"), which holds the Qiqavik and West Raglan projects, has entered into a letter of intent (the "LOI") with Focused Capital Corp. ("Focused"), to spin out TNN, via a reverse take-over of Focused.

In addition, RNC is pleased to announce that TNN has entered into an option agreement with Carolina Gold Resources ("CGR") on two gold properties located in the Carolina Gold belt area to be included in the TNN assets intended to be spun out into the newly listed entity and listed for trading on the TSX Venture Exchange upon completion of the transaction.

The newly listed entity intends to complete a capital raise to fund 2017 exploration programs at Qiqavik and West Raglan located in the Cape Smith Belt of northern Quebec and the CGR properties located in the Carolina Gold Belt.

Mark Selby, President and CEO of RNC, commented "Today's announcement will allow us to clearly demonstrate the value for RNC shareholders of these high potential assets which are receiving little to no value in our share price today. Putting these assets into a separate entity, in which RNC will continue to hold the largest stake, will allow capital to be raised directly to fund exploration programs without any dilution at the RNC level. We are looking forward to following up on last year's very exciting exploration programs where we made two high grade gold and gold-copper discoveries at Aurora and Esperance in our first season on the property and have a number of high potential targets along the 40km length of the property. With the geological setting and variety of styles of mineralization hosting gold and copper, we believe we may be uncovering a district similar to the Abitibi in the Val d'Or area at the turn of the last century which ultimately yielded a large number of gold, gold-copper and other mineral deposits."

Mr. Selby continued, "We are very excited to add the Carolina Gold belt properties to the TNN portfolio. Year-round exploration activities can be conducted at these high potential CGR properties which contain past producing mines, and some historic work which yielded results of up to 4.2 g/t Au over 17.8m near-surface. We believe the Carolina Gold belt, home to the to the first gold rush in the United States in the 1820s and the new Haile gold mine, offers strong potential as a relatively undervalued and underexplored gold belt."

As Focused is a Capital Pool Company, the proposed Transaction is intended to be Focused's Qualifying Transaction under TSX Venture Exchange Policy 2.4. Once the final structure and terms of the transaction are determined, the LOI will be superseded by a definitive agreement between TNN and Focused, and the parties will announce the signing of such definitive agreement by news release. Following completion of the RTO, the resulting issuer will hold all of TNN's assets and conduct the business of TNN. 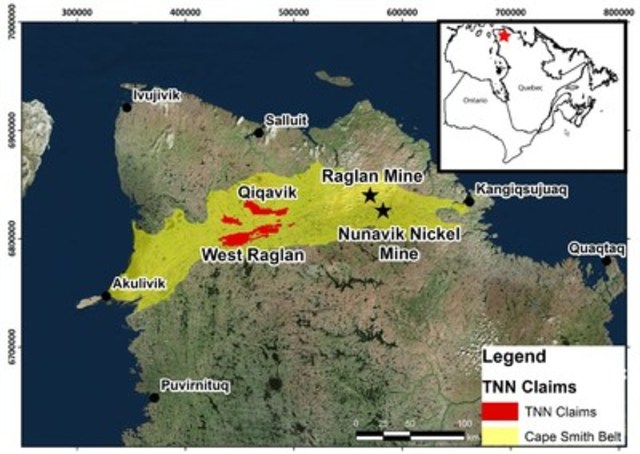 Qiqavik Gold-Copper Project
In 2015-2016 RNC (through TNN subsidiary) assembled claims in the Cape Smith Belt, northern Quebec, comprising the current 24,831 hectare property. A 2016 exploration program led to the discovery of two new high grade gold/copper occurrences, the Aurora and Esperance Zones, which have expanded the district scale mineralized trend to over 40km. The 2016 results represent only a small part of the 40 km long Qiqavik mineralized trend and highlight the exploration potential of the remainder of the trend. Multiple priority targets have been identified, including those identified in the recently completed interpretation of the first Induced Polarization ("IP") survey and new till sampling on the expanded property.

Analysis of property-wide till sampling results has also yielded several multi-element anomalies in addition to those associated with the Aurora and Esperance discoveries. Notably, the ABG Zone, a 1.8km long till anomaly associated with a zone of outcropping copper mineralization in hydrothermally altered quartz veins with values up to 1.2% Cu on a subparallel structure 3km to the southwest of the Aurora discovery.

These results represent a small part of the 40 km long Qiqavik mineralized trend and highlight the exploration potential of the remainder of the trend. 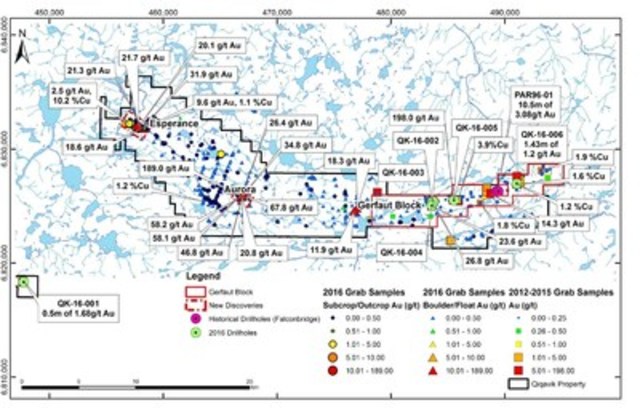 West Raglan Nickel-Copper-PGM Project
West Raglan is located in the west central portion of the Cape Smith Belt in northern Quebec. The Cape Smith Belt hosts prolific, high-grade nickel sulphide deposits, including two producing mines; Glencore's Raglan Mine and the Nunavik Nickel Mine. Highlights from the previous exploration campaigns include 28.28m grading 3.21% Ni, 1.32% Cu, 2.43g/t Pd, 0.65g/t Pt and 10.50m grading 2.78% Ni, 1.21% Cu, 2.78g/t Pd and 0.80g/t Pt. These intersections are very similar to the typical ore from the Raglan mine, which is amongst the richest Ni-Cu-PGM mines in the world. A 2015 prospecting program along 29 km of strike length of the North Raglan trend resulted in three new high grade mineralization discoveries at surface. 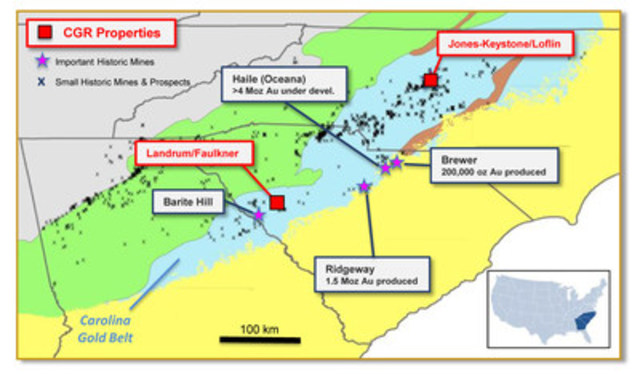 Carolina Gold Belt Properties
TNN has acquired options to earn a 70% interest in both the the Jones-Keystone/Loflin, and Landrum-Faulkner gold properties in the Carolina Gold Belt, home to the Haile Mine. The current development of the +4 million ounce Haile gold mine in South Carolina by OceanaGold has re-focused attention on the Carolinas as a highly prospective, under-explored and development-friendly jurisdiction.

Landrum-Faulkner
The Landrum-Faulkner property, located in South Carolina, consists of high-grade vein hosted gold mineralization occurring in the same volcanic sequence as the Haile and Ridgeway mines.  Mineralization at Landrum is exposed at surface and historic drilling demonstrates continuity over 300 m strike and over 100m depth. Historical drill results include an interval of 4.2 g/t Au over 17.8 m including 6.1 g/t Au over 11.3 m.

Financial Advisor
Haywood Securities Inc. has acted as financial advisor to RNC connection with the Transactions.

The technical information in this news release was reviewed and approved by Alger St-Jean, P. Geo., a qualified person (QP) for the purposes of NI 43-101.

About RNC
RNC Minerals is a multi-asset mineral resource company focused primarily on the acquisition, exploration, evaluation and development of base metal and precious metal properties. RNC's principal assets are the producing Beta Hunt gold and nickel mine in Western Australia, the Dumont Nickel Project located in the established Abitibi mining camp in Quebec and a 30% stake in the producing Reed Mine in the Flin Flon-Snow Lake region of Manitoba, Canada. RNC also owns a majority interest in the West Raglan and Qiqavik projects in Northern Quebec. RNC has a strong management team and Board with over 100 years of mining experience at Inco and Falconbridge. RNC's common shares trade on the TSX under the symbol RNX. RNC shares also trade on the OTCQX market under the symbol RNKLF.

Cautionary Statement Concerning Forward-Looking Statements
This news release contains "forward-looking information" including without limitation statements relating to the liquidity and capital resources of RNC, the proposed transactions involving TNN, Focused and CGR and the potential of the Qiqavik, West Raglan, Jones-Keystone Loflin and Landrum-Faulkner properties.