TORONTO, Nov. 9, 2020 /CNW/ - Karora Resources Inc. (TSX: KRR) ("Karora" or the "Corporation") is pleased to provide an update on near surface drilling at Aquarius and on planned drilling across the Corporation's properties during the fourth quarter. Karora is also in the process of completing a new Central Higginsville mining strategy that will be rolled out during the fourth quarter. The strategy will allow Karora to prioritize resource conversion and production scenarios to optimize mill feed blend rates into the Higginsville plant.

At Aquarius, analysis is underway to outline a potentially economic starter pit following a successful near surface drill program that was completed during the third quarter. Recent drilling identified high grade supergene gold mineralization including 43.5 g/t over 3.0 metres and 5.7 g/t over 6.0 metres. Expected cash flow from the proposed starter pit would offset some of the development costs to access the higher grade underground gold mineralization. Development of the Aquarius starter pit could commence as early as mid-2021.

With the increasing number of current and planned production sources from Higginsville, Beta Hunt and Spargos all competing for a share of the feedstock for the 1.4 Mtpa HGO treatment plant, a new regional mining strategy aimed at optimizing mine-to-mill feed is being developed. The new strategy divides Karora's regional operating and near-term mining areas into four main mining centres:

The aim of the strategy is to achieve the optimum blend of fresh oxide and hard rock material from the four regional centres to feed into the 1.4 Mtpa HGO plant in order to maintain maximum throughput rates and ensure continued strong recoveries. A more comprehensive update of the Higginsville Central mining strategy will be outlined after the announcement of a new reserve and resource estimate expected later in the fourth quarter.

With respect to drilling during the remainder of the year, Karora is well underway with a 50,000 metre drill program across the Western Australian operations to be completed during the fourth quarter. The drill program consists of resource definition drilling aimed at supporting the upcoming reserve and resource update as well as exploration drilling across multiple targets.

Paul Andre Huet, Chairman & CEO, commented: "In September we announced an aggressive 50% increase to our 2020 drilling budget to A$15 million and I am very pleased to announce some of the very strong initial near surface results at Aquarius as well as outline our targeted drilling over the remainder of the fourth quarter. This drilling will focus both on converting resources to reserves in our upcoming maiden company-wide reserve and resource update, our top priority, as well as targeting the exciting new exploration targets we have identified.

With drilling paused due to COVID-19 precautions for several months earlier this year, we are now drilling at an accelerated pace with six drills across Higginsville, Spargos and Beta Hunt. In fact, a large part of our 2020 drilling program is being undertaken in the fourth quarter as a result of these delays. Given the current challenges associated with sourcing both highly skilled workers and equipment in Western Australia, due to COVID-19 and State border closures, I am extremely proud of the resourcefulness of our operations team and their ability to execute on our expanded program. Once again, despite the numerous challenges faced, they continue to deliver on our aggressive corporate targets in our very first year of consistent, strong gold production.

At Higginsville, our Aquarius project has taken an important step forward with new drill results to support the planning of a potentially economic starter pit. The identification of near-surface, supergene style mineralization is expected to provide the opportunity to partially fund a  staged approach to development at Aquarius as we continue to fully assess and define the potential of the known historical high grade (19.5 g/t) gold mineralization which forms part of a larger laminated quartz vein system.

The conceptual underground access at Aquarius could also serve as a conduit to accessing the underground potential of the nearby Fairplay project, which is part of our upcoming Central Higginsville mining strategy. We expect to outline more details of this strategy to the market following our resource and reserve update for our Western Australian operations."

A total of 54 holes, totaling 5,079 metres have been completed at Aquarius. The aim of the drilling was to assess the opportunity of defining significant, near-surface mineralization to support a potential starter pit ahead of accessing the deeper, high grade Aquarius primary mineralization.

The recent drilling at Aquarius was designed to test the continuity of supergene mineralization above, and adjacent to, the main Aquarius quartz vein as well as extend the near-surface position of the existing historical mineral resource1

Results returned from the drilling show the supergene mineralization to extend over a footprint covering approximately 120 metres by 200 metres (see Figures 1 and 2). The supergene footprint is located east of the main Aquarius vein mineralization within multiple horizons. Drilling was also successful in extending primary mineralization along strike and closer to surface. Highlights from drilling program are listed below:

1.. Aquarius is the renamed and previously reported "Corona" deposit. The Corona Historical Mineral Resource consists of - Measured and Indicated 19,600 t @ 19.5 g/t (12,300 oz) and an Inferred 43,100 t @ 4.2 g/t (5,900 oz) - and is part of the Corona (now Aquarius)-Fairplay Historical Mineral Resource (see Karora news release, Feb 7, 2020, karoraresources.com) See Westgold 2018 Annual Update of Mineral Resources & Ore Reserves dated October 2, 2018, which is available to view on the ASX (www.asx.com.au) A qualified person has not done sufficient work on behalf of Karora to classify the historical estimate noted as current mineral resources and Karora is not treating the historical estimates as current mineral resources.
2. Estimated true width 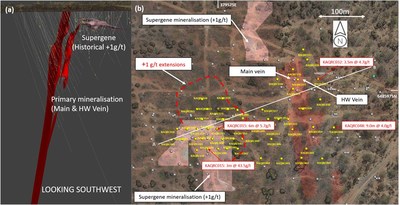 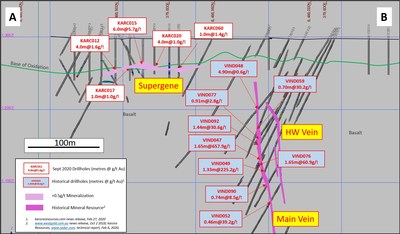 The increase in the 2020 Karora exploration budget to A$15 million is now reflected in accelerated drilling programs across all Karora's projects. Planned fourth quarter drilling is expected to total 50,000 metres with 36,000 metres allocated to Higginsville/Spargos and 14,000 metres to Beta Hunt. A total of six drill rigs are currently engaged to meet the expanded drill schedule: two underground rigs at Beta Hunt, two surface RC rigs at Higginsville as well as one lake aircore rig and one lake diamond rig at Higginsville.

An overview of key drilling targets is listed below:

Beta Hunt – 14,000 metres of diamond drilling: Drilling is targeting extensions and upgrading of the existing gold resource as well as extension of the Larkin Zone, A Zone North and Western Flanks South. As demonstrated in Karora's announcement of the 30C nickel trough discovery (see Karora news release dated September 10, 2020), nickel mineralization is located proximal to the targeted gold shear zones. As such, drilling will also target the 30C, 40C and 50C nickel troughs. Nickel is expected to provide potential by-product credits to future gold mining at Beta Hunt.

Higginsville Central – 2,000 metres of diamond drilling: Drilling will include the Vine and Barcelona prospects. The drill program is designed to test and extend primary shear hosted mineralization analogous to the Trident gold deposit and related to near surface mineralization associated with historical drilling. 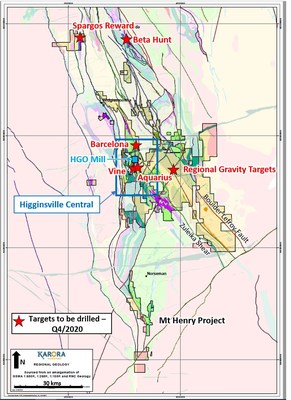 Higginsville: All RC drill sampling is conducted by Karora personnel. Samples for gold analysis are shipped to Bureau Veritas Laboratories of Kalgoorlie and Perth for preparation and assaying by 40 gram fire assay analytical method. All drilling samples submitted for assay include Certified Reference Material ("CRM") and coarse blank every 25th down hole metre. Duplicate samples are taken every 50th metre. The lab is also required to undertake a minimum of 1 in 45 wet screens on pulverised samples to ensure a minimum 90% passing at -75µm.

Karora is focused on growing gold production and reducing costs at its integrated Beta Hunt Gold Mine and Higginsville Gold Operations ("HGO") in Western Australia. The Higginsville treatment facility is a low-cost 1.4 Mtpa processing plant which is fed at capacity from Karora's underground Beta Hunt mine and open pit Higginsville mine. At Beta Hunt, a robust gold mineral resource and reserve is hosted in multiple gold shears, with gold intersections along a 4 km strike length remaining open in multiple directions. HGO has a substantial historical gold resource and prospective land package totaling approximately 1,800 square kilometers. Karora has a strong Board and management team focused on delivering shareholder value. Karora's common shares trade on the TSX under the symbol KRR. Karora shares also trade on the OTCQX market under the symbol KRRGD.

This news release contains "forward-looking information" including without limitation statements relating to the potential of the Beta Hunt Mine, Higginsville Gold Operation, Spargos Reward Gold Project and Aquarius Project and timing of the mineral resource and reserve estimate at Beta Hunt.