TORONTO, May 12, 2021 /CNW/ - Karora Resources Inc. (TSX: KRR) ("Karora" or the "Corporation") is pleased to announce continued strong drill results from the new Larkin Zone at its Beta Hunt Mine. The results form part of an infill and step-out drilling program designed to convert the Larkin Zone discovery (see Karora news release dated September 10, 2020) into Mineral Resources. A maiden Mineral Resource estimate for the Larkin Zone is planned for inclusion in the Company's 2021 consolidated resource update.

Paul Huet, Chairman and CEO of Karora said, "Today's results demonstrate the continued growth of the Larkin Gold discovery which now extends over an interpreted strike length of 650 metres and up to 120 metres down dip, while continuing to remain open along strike and at depth. Results to-date support our view that Larkin has excellent potential to be the third major gold production centre at Beta Hunt in addition to current mining operations in Western Flanks and A Zone.

Today's results include very encouraging infill drill intercepts and face samples. An intercept of 4.2g/t over 12.2 metres including 7.6 g/t over 5.8 metres in drill core EL-EA2-003AG as well as a face sample of 6.1 g/t over 4.6 metres build upon the strong results previously reported in February. The face sample was taken from an exploration drive approximately 150 metres south of the area from which the new drill intercepts are being reported.

I am very pleased with how far we have advanced the work to achieve a maiden Mineral Resource estimate for the Larkin Zone. It has been only seven months since we announced the first discovery holes. We have leveraged the extensive infrastructure already in place to accelerate both drilling and sampling work. Without this infrastructure in place (as a result of Beta Hunt's historic nickel operations), this resource definition work would cost far in excess of our current costs. Simply put, this is a major advantage we have over other underground operations.

For our maiden resource calculation, we intend to complete drill testing of Larkin over a strike length of 1,000 metres and up to 150 metres below the ultramafic / basalt contact during the third quarter. We are excited to deliver this maiden resource just one year after initial discovery and intend to include it in our consolidated 2021 reserve and resource update. Larkin is certainly looking like the next major step forward in underground mining at Beta Hunt."

Resource definition drilling in the Larkin Zone completed through the end of first quarter now totals 29 holes for 6,720 metres. The balance of the drill program (an additional 22 holes totalling 2,800 metres), which will test the southern extension of Larkin, is expected to be completed in the third quarter of 2021 (Figure 1).

The drill program is designed to test the Larkin Zone over 1,000 metres of strike and up to 150 metres below the nickel contact. Turn-around times on assay results continue to be held-up by industry-wide laboratory capacity issues resulting from increased demand for their services and labour supply hurdles related to COVID 19 restrictions. As restrictions ease, this situation is expected to improve going forward. 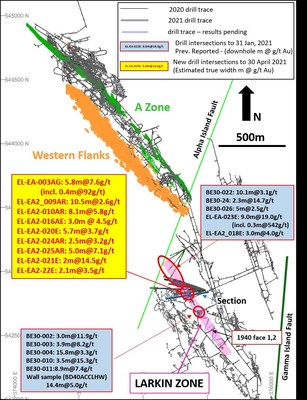 Since the previous update on the Larkin Zone (see Karora news release, Feb. 1, 2021), assay results have been received for an additional ten holes with significant results1.detailed below:

The ten holes were designed to infill previously reported drill results between the Alpha Island Fault to the north and the 40 Access drill cuddy to the south (Karora news release, February 1, 2020). Drill results have now confirmed mineralization over 500 metres along strike and 120 metres below the ultramafic/basalt contact (down dip). Preliminary interpretation of the results to date show the Larkin Zone is comprised of two to three, steep dipping, mineralized zones (Figure 2) of varying widths (3 metres to 12 metres) with mineralization associated with biotite-albite-pyrite altered steep-dipping shear zones and narrow, extensional quartz veins, similar in style to the A Zone and Western Flanks deposits. 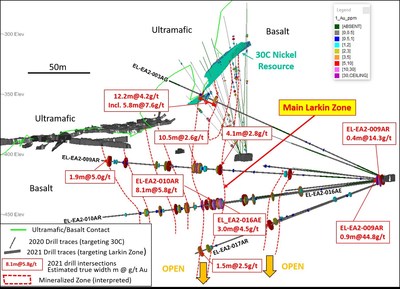 Also, since previously reporting on the Larkin Zone, two level development cuts were taken as an exploratory drive initiated from the existing 1940 development (Figure 1) along the interpreted west-dipping main zone to assist in interpreting Larkin Zone mineralization. Face sample results from the first two cuts taken from the 1940N exploration drive show intense alteration and veining supported by gold grades in-line with results from drilling to the south. The 1940 face samples extend the Larkin Zone 150 metres north of reported drill results for a total strike length of 650 metres. Assay results from the face samples1.are shown below: 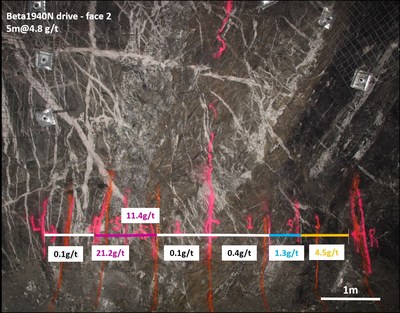 At Beta Hunt all drill core sampling is conducted by Karora personnel. Drill core samples for gold analysis in this instance were shipped to ALS Laboratories, Perth for preparation and assaying by 50gram fire assay analytical method. All gold diamond drilling samples submitted for assay include at least one blank and one Certified Reference Material ("CRM") per batch, plus one CRM or blank every 20 samples. In samples with observed visible gold mineralization, a coarse blank is inserted after the visible gold mineralization to serve as both a coarse flush to prevent contamination of subsequent samples and a test for gold smearing from one sample to the next which may have resulted from inadequate cleaning of the crusher and pulveriser. The lab is also required to undertake a minimum of 1 in 20 wet screens on pulverised samples to ensure a minimum 90% passing at -75µm. Wall samples were shipped to the Kalgoorlie SGS laboratory. Wall samples are collected as rock chips using a G-pick along a horizontal sample traverse. All rock chip samples are submitted with at least one CRM (standard) every 20 samples. Where problems have been identified in QAQC checks, Karora personnel and the SGS and ALS laboratory staff have actively pursued and corrected the issues as standard procedure.

This news release contains "forward-looking information" including without limitation statements relating to the timing for the completion of technical studies and the potential of the Beta Hunt Mine, Higginsville Gold Operation, the Aquarius Project and the Spargos Gold Project.