Karora Announces High Grade Nickel Results from the 50C Nickel Trough at Beta Hunt with Intersections of 5.3% Nickel over 2.2 metres and 4.0% Nickel over 3.5 metres, Extending the Zone to over 80 metres in Width
Continue Reading

Assays are pending on a further 16 holes.

Paul Huet, Chairman and CEO of Karora said, "With each drill result, the nickel potential at Beta Hunt continues to build towards a very meaningful by-product contributor for Karora. We have now extended the width of nickel mineralization at the 50C discovery to over 80 metres along a strike length of 150 metres, remaining open along 2.6 kilometres of potential strike to the southeast. The high nickel grades intersected in the first two follow-up drill holes to the 50C discovery are very encouraging, with pending assays for sixteen remaining holes expected in the fourth quarter.

As a reminder, the 50C discovery is within close proximity to existing mine development, reflecting the enormous advantage we have at Beta Hunt with over 400 kilometres of existing underground development already in place due to previous mining operations. The development provides access to optimal underground drill bay areas to quickly advance exploration work and potentially facilitate both faster development and mining.

In the second half of 2021 Karora, has undertaken a 6,000 metre drill program aimed at extending both the previously reported 50C nickel trough discovery and the adjacent 10C nickel Mineral Resource. The 50C discovery was highlighted by the previously reported intersection of 11.6% Ni over 4.6 metres (downhole) in drill hole G50-22-005E. To date, 28 holes have been drilled for 4,986 metres. Assay results for the 50C and 10C drilling programs have been received for 6 holes.

Assay results for these holes are as follows:

Nickel mineralization on the targeted basalt/ultramafic contact has been logged as massive, matrix-supported and disseminated nickel sulphide, indicating that the nickel sulphide intercepts are representative of an intact nickel trough.

Drilling totaling eighteen holes has been completed up to 45 metres south and 100 metres north along strike from the discovery intersection with nickel sulphide mineralization evident in twelve of the completed holes. Porphyry intrusives in the northern drill sections have replaced parts of the nickel contact mineralization position as drilling moves closer to the Gamma Island Fault. Results are pending for sixteen 50C holes.

Significant results returned to date from the 10C drilling are highlighted below:

Overall, recent drill results continue to reinforce the potential for mineralization that is similar to the Beta Zone, south of the Gamma Island Fault and strengthen the initial interpretation that this new mine area, which is only 140 metres from existing mine development, represents a significant growth opportunity for by-product nickel production at Beta Hunt.

The structural and mineralogical characteristics of the 50C trough closely align with those of the Western Nickel Belt at the southern end of the Beta nickel workings indicating that the 50C nickel mineralization represents an offset extension to the Western Nickel Belt. The 10C is interpreted to be the offset extension to the Eastern Nickel Belt and has structural and mineralogical characteristics that are consistent with this interpretation. There is potential for both belts to join within the Gamma Zone mineralized system. Further drilling is required to support this interpretation.

It is anticipated that all nickel assay results from the first stage of drilling the Gamma Zone will be received before the end of 2021 in time to produce a revised nickel mineralization model to be completed during the first quarter of 2022. The revised model will form the basis of a follow-up drill program planned for the first half of 2022. 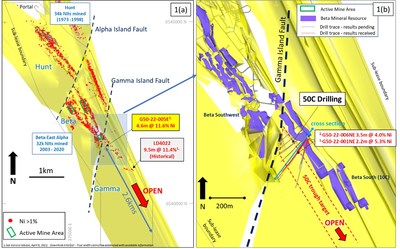 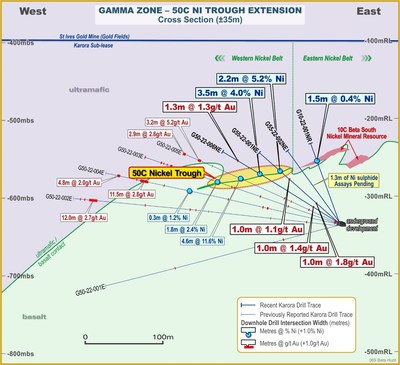 Karora is focused on doubling gold production to 200,000 ounces by 2024 compared to 2020 and reducing costs at its integrated Beta Hunt Gold Mine and Higginsville Gold Operations ("HGO") in Western Australia. The Higginsville treatment facility is a low-cost 1.6 Mtpa processing plant, expanding to a planned 2.5 Mtpa by 2024, which is fed at capacity from Karora's underground Beta Hunt mine and Higginsville mines. At Beta Hunt, a robust gold Mineral Resource and Reserve is hosted in multiple gold shears, with gold intersections along a 4 km strike length remaining open in multiple directions. HGO has a substantial Mineral gold Resource and Reserve and prospective land package totaling approximately 1,900 square kilometers. The Company also owns the high grade Spargos Reward project which began mining in 2021. Karora has a strong Board and management team focused on delivering shareholder value and responsible mining, as demonstrated by Karora's commitment to reducing emissions across its operations. Karora's common shares trade on the TSX under the symbol KRR and also trade on the OTCQX market under the symbol KRRGF.

This news release contains "forward-looking information" including without limitation statements relating to the timing for the completion of technical studies, liquidity and capital resources of Karora, production guidance and the potential of the Beta Hunt Mine, Higginsville Gold Operation, the Aquarius Project and the Spargos Gold Project.