TORONTO, Jan. 24, 2022 /CNW/ - Karora Resources Inc. (TSX: KRR) ("Karora" or the "Corporation") is pleased to announce new exploration drilling results from the Beta Hunt Mine have materially extended the strike length of gold mineralization at the Fletcher Zone to over 500 metres. The recently discovered Gamma Block mineralization (see Karora news release dated November 15, 2021) strike length has also been extended to over 200 metres. Both mineralized systems remain open along strike and at depth.

First discovered by Karora in 2016, the Fletcher Zone is a parallel shear zone located approximately 350 metres west from the Western Flanks Zone and represents a third major shear zone at Beta Hunt. New exploration drilling, designed to further test the strike length of Fletcher, was highlighted by intersections of 3.3 g/t over 9.5 metres, including 5.5 g/t over 4.4 metres (hole AF18LV-07AE) and 18.5 g/t over 0.8 metres (hole AF18LV-16AE).

New exploration drilling completed south of the recently discovered Gamma Block gold mineralization, located at the southern extent of the existing mine development, encountered further encouraging results. The holes drilled served a dual purpose: to test both the 50C Nickel trough and the underlying Gamma Block gold mineralization. Although Gamma and 50C can be mined separately, they are close enough to be accessed from the same level development potentially reducing cost and access time to mine both areas.

Paul Huet, Chairman and CEO of Karora said, "Exploration at Beta Hunt continues to drive extensions of known primary shears and of newly discovered zones, underscoring the fact that we are only just beginning to understand the true potential of the mine. The new drilling announced today highlights the exciting potential south of the Alpha Island and Gamma faults.

Fletcher is a third major shear zone at Beta Hunt that we have now materially extended for the first time since 2016. New drilling has extended the known strike extent to over 500 metres and over a 150 metre vertical extent. With strike potential up to 2 kilometres, while remaining open at depth, Fletcher has the potential to form a long-term backbone of our operation in future years.

The new Gamma Block mineralization, underlying our exciting high grade 50C Nickel trough, represents a second new potential gold mining area. Our new drilling has now extended Gamma over 200 metres of strike extent and remains open both along strike and at depth. What is encouraging about both of these zones is that they are easily accessed on the edges of existing development, lowering the cost associated with setting up mining activities.

Lastly, we expect to issue a progress update on our Mineral Resources later in the first quarter, which will include the addition of the maiden Larkin Zone Mineral Resource."

At Beta Hunt, over the period from August 1, 2021 to December 31, 2021 a total of 76 resource definition and exploration drill holes were drilled totalling 15,323 metres. The summary below covers new gold assay results received over this period (Figure 1).

Drilling focused on testing the potential strike extension of the Fletcher Zone and A Zone North, testing the Western Flanks northern extension, upgrading the 30C nickel Mineral Resource and defining the 50C nickel trough in the Gamma Block, the latter intersecting gold mineralization below the trough position. 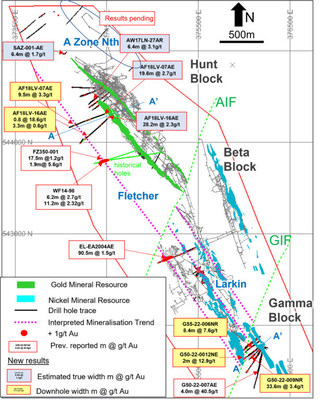 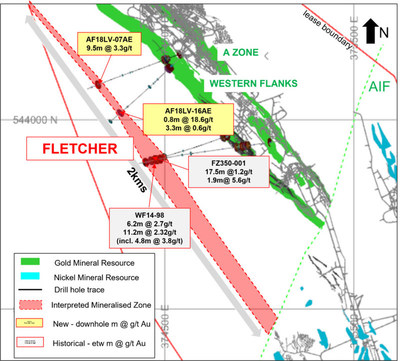 Recent drilling involved two holes to test the interpreted strike extent of the FSZ. Hole AF18LV-16AE tested the FSZ 300 metres north along strike of the Discovery section, while hole AF18LV-07AE tested the FSZ a further 200 metres to the north. Both holes intersected significant mineralization in the targeted position confirming for the first time the strike potential of the FSZ.

The FSZ mineralization in AF18LV-16AE comprises weakly sheared and altered basalt, with the high grade 18.8 g/t assay associated with extensional quartz veining and biotite-pyrite alteration. Mineralization in AF18LV-07AE (Figure 3) is defined by a 0.2 g/t halo associated with weak to moderate shearing, extensional quartz veining up to 10cm wide, weak biotite alteration and disseminated pyrite. This veining and alteration style is most similar to Discovery section intersections and supports the interpretation that the mineralization is related to the same shear zone. 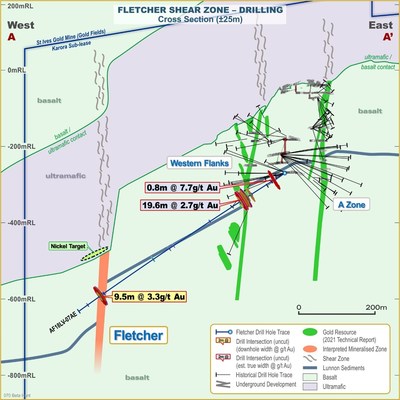 Both holes also intersected the Western Flanks Zone in the early part of each hole with assay results1.supporting, as well as upgrading, the existing Western Flanks Mineral Resource.

The four drill holes now intersecting FSZ support a steep, west-dipping zone over 150 metres in down dip extent over 500 metres of strike with potential to extend over a total strike length of 2 kilometres. The mineralized system remains open at depth. These results and the potential mining opportunity they will deliver provide continued support of Karora's Growth Plan.

Drilling in the Gamma Block continued with holes designed to test the 50C nickel trough on the ultramafic/basalt contact consistently intersecting gold mineralization in the underlying footwall basalt. Early-stage geological interpretation indicates the gold mineralization occurs as parallel, northwest trending zones of variable widths and grades over 200 metres of strike south of the Gamma Fault. Mineralization is characteristically associated with quartz-albite-carbonate stockwork veining in a moderately biotite altered basalt with well developed euhedral pyrite mineralization. To underline the potential significance of this new area, drill hole G50-22-009NR intersected 3.4 g/t over 33.6 metres which represents the widest gold intersection recorded to date in the Gamma Block. Significant gold results from the drilling are reported below. Nickel assays are still pending. 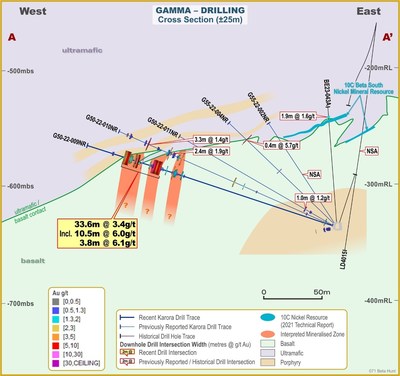 A surface diamond drillhole, SAZ-001-AE was drilled to test for the northern extension of the A Zone Mineral Resource. The hole was collared from surface as the most accessible underground drill position did not provide a high angle drill intersection representative of the A Zone mineralization. The drill hole intersected thin, extensional to brecciated quartz carbonate veining in a strongly biotite altered basalt with disseminated pyrite associated with an intersection of 1.7 g/t over 6.4 metres (estimated true width) in the A Zone position, 80 metres from the most northerly drill intersection and provides strong encouragement for the A Zone Mineral Resource to continue to extend north and up-dip from the existing Resource. This result reinforces the potential for early production from the recently commenced second decline.

Further surface drilling is planned for Q1 2022 to validate and extend this result.

Karora is focused on doubling gold production to 200,000 ounces by 2024 compared to 2020 and reducing costs at its integrated Beta Hunt Gold Mine and Higginsville Gold Operations ("HGO") in Western Australia. The Higginsville treatment facility is a low-cost 1.6 Mtpa processing plant, expanding to a planned 2.5 Mtpa by 2024, which is fed at capacity from Karora's underground Beta Hunt mine and Higginsville mines. At Beta Hunt, a robust gold Mineral Resource and Reserve is hosted in multiple gold shears, with gold intersections along a 4 km strike length remaining open in multiple directions. HGO has a substantial Mineral gold Resource and Reserve and prospective land package totaling approximately 1,800 square kilometers. The Company also owns the high grade Spargos Reward project which began mining in 2021. Karora has a strong Board and management team focused on delivering shareholder value and responsible mining, as demonstrated by Karora's commitment to reducing emissions across its operations. Karora's common shares trade on the TSX under the symbol KRR and also trade on the OTCQX market under the symbol KRRGF.

This news release contains "forward-looking information" including without limitation statements relating to the timing for the completion of technical studies the results of exploration and development work, liquidity and capital resources of Karora, production guidance and the potential of the Beta Hunt Mine, Higginsville Gold Operation, the Aquarius Project and the Spargos Gold Project.