TORONTO, April 7, 2022 /CNW/ - Karora Resources Inc. (TSX: KRR) (OTCQX: KRRGF) ("Karora" or the "Corporation") is pleased to announce its Consolidated Gold Measured and Indicated ("M&I") Mineral Resource, net of depletions, has increased by 8% and the Consolidated Inferred Mineral Resources have increased by 43%. The update is highlighted by the addition of the maiden Larkin Zone Mineral Resource at Beta Hunt which contributed 1.44 million tonnes @ 2.6 g/t for 119,000 ounces in the M&I category and 2.17 million tonnes @ 2.3 g/t for 162,000 ounces in the Inferred category.

Paul Andre Huet, Chairman & CEO, commented: "We are very pleased to announce robust increases, net of mining depletion, to our Consolidated Gold Mineral Resource in the M&I category to over 2.7 million ounces and over 1.2 million ounces in the Inferred category.

In particular, the addition of the maiden Mineral Resource for the Larkin Zone at Beta is exciting as it demonstrates how quickly we were able to move from the initial discovery of the zone announced in September 2020 (see Karora news release dated September 10, 2020) to the development of our first Mineral Resource of 119,000 ounces in the M&I category and a further 162,000 ounces in the Inferred category. The Larkin Zone has been delineated to a strike length of over 1,000 metres and a depth of 150 metres and remains open along strike and at depth providing significant potential for further expansion as our drill program at Beta Hunt continues. Our ability to rapidly convert new discoveries at Beta Hunt bodes well for future Mineral Resource updates as we continue to drill at our other recent discoveries at the mine – the Fletcher Shear Zone and the Gamma Block.

Our success in expanding the Beta Hunt Mineral Resource is a critical component of our growth plan to increase production to our guided range of 185,000-205,000 ounces annually by 2024. Approximately 80% of our mill feed will come from our flagship Beta Hunt mine once operations are fully expanded to the schedule outlined in our growth plan." 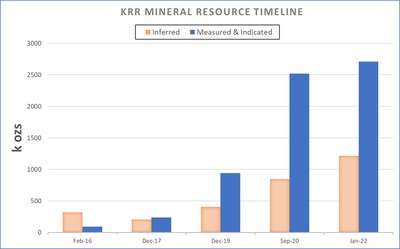 Exploration and resource definition activities at Beta Hunt in 2021 were concentrated on the newly discovered Larkin Zone and infill and extensional drilling of the A Zone and Western Flanks.

The Larkin Zone was discovered in late 2020 as part of a drill program targeting the 30C nickel trough which lies directly above the gold mineralization. The Larkin Zone is Karora's first gold Mineral Resource south of the Alpha Island Fault (AIF) and is interpreted as the southern fault off-set extension of the Western Flanks. The Larkin Zone remains open along strike to the south and down-dip.

The A Zone drilling tested both the northern up-plunge and down-dip extensions of the Sept 2020 Mineral Resource. The Western Flanks drilling, both along strike and down-dip, upgraded and extended both the northern and southern margins of the September 2020 Inferred Mineral Resource. Both the A zone and Western Flanks remain open down-dip with the A Zone still open to the north.

For 2022, drilling at Beta Hunt will continue to extend and upgrade the Western Flanks, A Zone and new Larkin Zone resources. In addition, exploration drilling will test the along strike continuity of the Fletcher Zone, target parallel mineralized zones to the Larkin Zone in the Beta Block as well as new mineralization identified in the Gamma Block.

The first-ever Gold Mineral Resource was completed for the Larkin Zone (see table 2) and comprises Measured and Indicated, 1.44 million tonnes grading 2.6 g/t (119,000 ounces) and Inferred 2.17 million tonnes grading 2.3 g/t (162,000 ounces). The Mineral Resource is located south of the Alpha Island Fault (AIF) in the Beta Block and represents Karora's first resource south of this Fault. The Larkin Zone is interpreted as the southern off-set extension to the Western Flanks deposit. 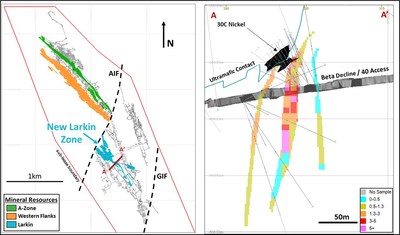 Gold mineralization in the Larkin Zone is hosted in the Lunnon Basalt below the 30C nickel trough and comprises a series of mineralized sheared, veined and altered zones steeply dipping to the west, and striking north north-west. The exception to this is a western footwall mineralized pod which strikes west-northwest in contrast to the general Beta Hunt mineralized trend. Mineralized lenses vary in thickness from 1 metre to 15 metres wide. The Larkin Zone is mineralized over approximately 1.1 kilometres of strike length with the northern part containing the higher grade and greater thickness in multiple lenses.

Mineralized zones are associated with shearing, biotite-pyrite alteration, albite alteration and quartz veining and broadly follow the nickel mineralized troughs at the top of the basalt. At the Larkin Zone's northern end there are up to eight subparallel gold mineralized zones interpreted beneath the nickel mineralization. Mineralization generally dips steeply west with thrusting close to the basalt-ultramafic contact, producing shallower dips nearer the contact.

A block model was created using Studio RM software using a parent block size of 5 metres x 5 metres x 5 metres vertical with sub-blocking to 1 metre by 1 metre by 2.5 metres. Ordinary kriging (OK) with dynamic anisotropy was used for the grade estimation. The final gold grade was made using the top-cut drill composites only. The model was depleted for mine voids.

The deposit was classified as Indicated or Inferred Mineral Resource based on a combination of quantitative and qualitative criteria which included geological continuity and confidence in volume models, data quality, sample spacing, lode continuity, and estimation parameters.

Resource definition drilling in 2021 was focused on infilling and extending near-mill resources. Additional drilling was also undertaken to upgrade the Spargos deposit. Results from the drilling were used to update existing mineral resources and produce two new resources at Aquarius and Spargos. The Spargos Mineral Resource was previously reported in Karora news release, June 28, 2021.

For 2022, exploration and resource definition drilling at Higginsville is planned to upgrade and extend short-term mining production targets (0 – 2 years) complemented by a strong commitment to greenfields exploration targeting significant new discoveries. The initial drilling focus for 2022 resource definition includes extensional and infill drilling to potentially support an underground mine at Spargos and ongoing extensional drilling around the existing underground mines at Two Boys and Aquarius within the Higginsville Central area.

An updated Nickel Mineral Resource estimate is expected to be released in the second quarter of 2022 and Karora's Annual Mineral Reserves and Resource Statement is planned to be announced in Q4 2022 in conjunction with the Corporation's annual budgeting cycle.

Mr. Stephen Devlin is Group Geologist for Karora, a full time employee of Karora and a Fellow of the AusIMM. Mr Devlin has sufficient experience that is relevant to the style of mineralization and type of deposit under consideration and to the activity being undertaken to qualify as a Competent Person as defined in the JORC Code, 2012 Edition, and fulfils the requirements to be a "Qualified Person" for the purposes of NI 43-101. Mr Devlin has reviewed and approved the disclosure of the technical information for the Beta Hunt and Higginsville Gold Mineral Resource included in this news release.

Detailed Footnotes relating to Mineral Resource Estimates as at January 31,2022
About Karora Resources

Karora is focused on doubling gold production to 200,000 ounces by 2024 compared to 2020 and reducing costs at its integrated Beta Hunt Gold Mine and Higginsville Gold Operations ("HGO") in Western Australia. The Higginsville treatment facility is a low-cost 1.6 Mtpa processing plant, expanding to a planned 2.5 Mtpa by 2024, which is fed at capacity from Karora's underground Beta Hunt mine and Higginsville mines. At Beta Hunt, a robust gold Mineral Resource and Reserve is hosted in multiple gold shears, with gold intersections along a 4 km strike length remaining open in multiple directions. HGO has a substantial Mineral gold Resource and Reserve and prospective land package totaling approximately 1,800 square kilometers. The Company also owns the high grade Spargos Reward project, which came into production in 2021. Karora has a strong Board and management team focused on delivering shareholder value and responsible mining, as demonstrated by Karora's commitment to reducing emissions across its operations. Karora's common shares trade on the TSX under the symbol KRR and also trade on the OTCQX market under the symbol KRRGF.

This news release contains "forward-looking information" including without limitation statements relating to the timing of technical studies and the potential of the Beta Hunt Mine, Higginsville Gold Operation, the Aquarius Project and the Spargos Gold Project.