In addition, Western Flanks deep drilling has now intersected Main Shear mineralization up to 250 metres below the current Mineral Resource at the southern end of the zone at higher grades than the current Resource. Western Flanks is Beta Hunt's largest shear zone and these latest results provide more confidence for the expansion of our key resource asset in support of Karora's previously announced growth plan to have gold production increase to between 185,000 and 205,000 ounces by 2024.

Intersection highlights from both the Mason and Western Flanks Deeps underground diamond drill program are listed below:

The results from Mason support our interpretation of a significant gold mineralized system parallel to, and west of the Larkin Zone. I am particularly excited that the new results include a best-ever Mason intersection of 12.0 g/t over 17.0 metres, on top of the previous strong results that included 6.0 g/t over 13.0 metres (see figure 1 and Karora news release dated August 23, 2022). Additionally, we reported more strong results from the Larkin and  Cowcill zones including 7.0 g/t over 7.3 metres and 4.1 g/t over 10.0 metres . Both Mason and Cowcill demonstrate the considerable new potential south of the Alpha Island Fault at Beta Hunt from areas that were previously almost untested for gold mineralization.

From July 1, 2022 to September 30, 2022, a total of 40 gold resource definition and exploration holes were drilled at Beta Hunt for 13,664 metres. Gold drilling focused on extending and infilling at Western Flanks, A Zone Deeps and the Larkin, Mason and Cowcill Zones south of the Alpha Island Fault.

The location off all gold drill holes with assay results received over the period July 24 to October 13, 2022, are shown in Figure 1 and detailed in Table 1. The drilling results include holes targeting nickel which are also assayed for gold mineralization. 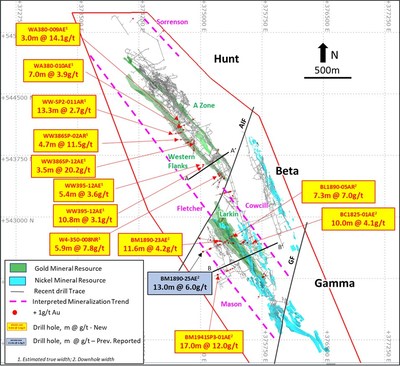 Mason: Results were returned from two holes drilled to test the interpreted Mason Zone mineralization located up to 300 metres west of and parallel to the Larkin Zone. Both holes returned significant assays1.supporting the previously released result of 6.0 g/t over 13 metres in drill hole BM1890-25AE (see Karora release, August 23, 2022) highlighting the potential for a new mining opportunity south of the Alpha Island Fault.

Mason Zone mineralization is characterized by strong biotite-pyrite-albite alteration associated with weak to moderate shearing and both shear and extensional quartz veining – similar to Western Flanks mineralization. Mineralization at Mason is now confirmed over a 300 metre strike length.

Significant results also continue to be returned for the Larkin and Cowcill Zones:

These results support the potential for both the Mason and Cowcill Zones to deliver new mining opportunities south of the Alpha Island Fault. Both zones are still at a relatively early stage in their development and, until now, were virtually untested along strike for gold mineralization as a result of the historical focus on nickel targets along the ultramafic/basalt contact (see Figure 2). 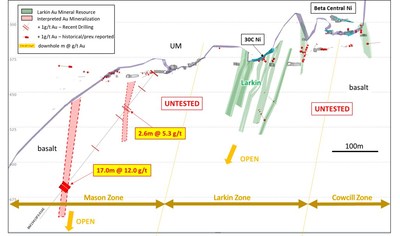 Further, follow-up drilling of the Mason and Cowcill Zones is planned for the fourth quarter.

Western Flanks Deeps: Drilling is designed to support the Karora growth plan by upgrading and extending the current Mineral Resource. As part of the current program, drilling tested the down-dip continuation of the gold mineralization below the southern portion of the deposit as part of the same program that drilled the central, down-dip portion of the deposit. Results for the central portion were previously reported and included intersections of 13.6 g/t over 5.3 metres and 2.7 g/t over 6.7 metres (Karora news release, August 2, 2022). Initial results from drilling the down-dip southern portion of the deposit have now been received with significant intersections1.highlighted below:

The new results show strong mineralization in the targeted main shear zone position up to 250 metres below the current resource and, encouragingly, with higher grades (> 3 g/t) than the current Western Flanks Mineral Resource (2.7 g/t). Combined with previously reported results (Karora news release, August 2,2022), the new results indicate continuity of the Western Flanks gold system from 150 metres to 250 metres below the current Mineral Resource over a strike length of 450 metres, with the system remaining open at depth and along strike. 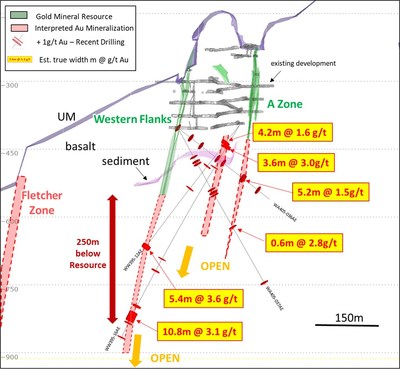 Karora is focused on increasing gold production to a targeted range of 185,000-205,000 ounces by 2024 at its integrated Beta Hunt Gold Mine and Higginsville Gold Operations ("HGO") in Western Australia. The Higginsville treatment facility is a low-cost 1.6 Mtpa processing plant, expanding to a planned 2.5 Mtpa by 2024, which is fed at capacity from Karora's underground Beta Hunt mine and Higginsville mines. At Beta Hunt, a robust gold Mineral Resource and Reserve are hosted in multiple gold shears, with gold intersections along a 4 km strike length remaining open in multiple directions. HGO has a substantial Mineral gold Resource and Reserve and prospective land package totaling approximately 1,900 square kilometers. The Company also owns the high grade Spargos Reward project, which came into production in 2021. Karora has a strong Board and management team focused on delivering shareholder value and responsible mining, as demonstrated by Karora's commitment to reducing emissions across its operations. Karora's common shares trade on the TSX under the symbol KRR and also trade on the OTCQX market under the symbol KRRGF.

This news release contains "forward-looking information" including without limitation statements relating to production guidance and the potential of the Beta Hunt Mine, Higginsville Gold Operation and the Spargos Gold Project, and the timing of completion of the resource estimate.